Rumpler C.I is a Codex Entry featured in Battlefield 1. Detailing information about the Rumpler C.I, it is unlocked by obtaining fifteen kills with Attack Planes. 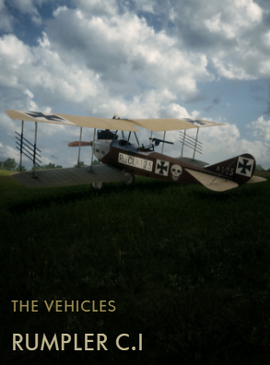 The German Rumpler C 1 was introduced in 1915 as an armed fighting scout airplane and saw service all the way to the end of the war in 1918. It featured a fixed forward-firing machine gun that was coupled with the "interrupter" gear that allowed the pilot to fire through the propeller. it was used for tactical bombing, reconnaissance and offensive roles.

Pilots appreciated her strength and durability and the plane was also used by the Ottoman Air Force for combat in the Middle East.

Retrieved from "https://battlefield.fandom.com/wiki/Rumpler_C.I_(Codex_Entry)?oldid=343274"
Community content is available under CC-BY-SA unless otherwise noted.