Rupture is a Codex Entry featured in Battlefield 1, introduced in the Battlefield 1: They Shall Not Pass expansion. It is unlocked by winning one game on Rupture. 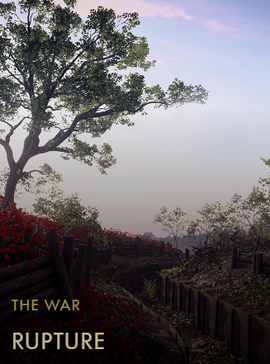 During their Spring Offensive in 1918, German forces had crossed the River Aisne, capturing important bridges and heading towards Soissons. Here, the old trenches, now overgrown and abandoned, still spoke of the fighting of 1914. Those trenches soon returned to life as the Allied counter-attack hit Soissons in July 1918. In concert with the attack, the French and Americans attacked to the south at Chateau-Thierry, aiming at driving a wedge between the German defenses and forcing them back over the river. The stiff resistance of the German machine guns reduced the American divisions to half their strength, but despite the heavy causalities the combined Allied effort proved decisive. The "Rainbow Division" crossed the Ourcq River on the 28th, attacking the village of Sergy. Heavy artillery caused huge casualities and vicious house-to-house fighting erupted. Sergy changed hands 7 times until the Americans could take it for good. Similar close quarter battles happened all over the frontline and the Germans had to finally withdraw to their fortified positions behind the Aisne.

Retrieved from "https://battlefield.fandom.com/wiki/Rupture_(Codex_Entry)?oldid=343340"
Community content is available under CC-BY-SA unless otherwise noted.