Russia's Entry into the War is a Codex Entry featured in Battlefield 1, introduced in the Battlefield 1: In the Name of the Tsar expansion. It is unlocked upon winning a round on Brusilov Keep. 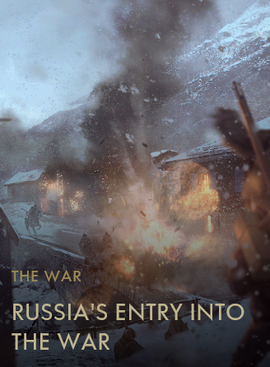 In 1914, Russia still bore scars from its humiliating defeat in the Russo-Japanese War (1904-05) and the numerous workers’ strikes of the 1905 Revolution gnawed at the foundations of tsarist rule. The autocratic Tsar Nicholas II was unwilling to change Russia’s obsolete political system, one which widened the gap between the poor and oppressed, the majority of the people, and the small minority of bourgeoisie and aristocratic landowners. The prospect of an external enemy, however, seemed to unite all of Russia once again behind its leader. The rising Pan-Slavic ideology fitted together with Russia's foreign policy that sought to gain influence in the Balkans, and to extend its reach along the Black Sea and towards Constantinople. Russian geopolitical ambitions there naturally clashed with the interests of Austria-Hungary and the Ottoman Empire. Russia had a population of nearly 170 million, but over 90% of them lived and worked in agricultural societies, and nationwide industrialization had not been possible without foreign help and money. Germany had turned its back on Russia to strengthen its ties with Austria-Hungary, consequently Russia arranged economic deals with France, which in turn led to a military alliance between the two. These alliances meant that a war between the Russian and the Austro-Hungarian Empires over issues in the Balkans would inevitably drag in France and Germany. A war that not even the deep affinity between the two royal cousins Kaiser Wilhelm and Tsar Nicholas would be able to stop, once mobilization began.

Retrieved from "https://battlefield.fandom.com/wiki/Russia%27s_Entry_into_the_War_(Codex_Entry)?oldid=343355"
Community content is available under CC-BY-SA unless otherwise noted.