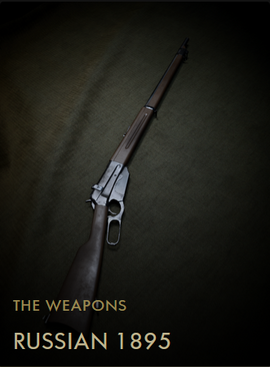 Lever-action rifles are usually associated with the Wild West, but in WW1 one model of lever-action rifle was used successfully by Russia. At the outset of the war, the Russian Empire was desperately short of its Mosin-Nagant service rifle for its millions of troops, leading to the Russians going around the world to purchase any additional suitable weapons they could get.

One of the rifles that caught their attention was the American M1895 lever-action sporting rifle, used by Theodore Roosevelt for safari hunting. The American manufacturer got an order for 300,000 rifles modified for Russian military use; including the addition of a bayonet lug, a box magazine accepting Mosin-Nagant stripper clips and rechambered for Russian smokeless rifle ammunition. This modified model was designated the "Model 1915" and saw a lot of action where it performed well.

Retrieved from "https://battlefield.fandom.com/wiki/Russian_1895_(Codex_Entry)?oldid=343134"
Community content is available under CC-BY-SA unless otherwise noted.