Russian Award Knife is a Codex Entry featured in Battlefield 1. Introduced with the In the Name of the Tsar expansion, it was added in the November 2017 update. It is unlocked upon obtaining ten kills with the Russian Award Knife. 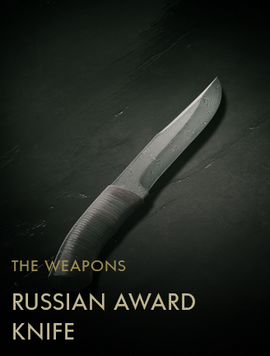 This model of knife was manufactured in 1915 in the city of Zlatoust, which from the early 19th century housed one of Russia's main weapon factories. Zlatoust is known for producing the first cannons made of Russian steel, and quickly became famous for artistic metal engravings on swords and knives. These finely engraved melee weapons would often be awarded to soldiers for bravery.

Retrieved from "https://battlefield.fandom.com/wiki/Russian_Award_Knife_(Codex_Entry)?oldid=343233"
Community content is available under CC-BY-SA unless otherwise noted.