Russian Axe is a Codex Entry featured in Battlefield 1, introduced in the Turning Tides expansion pack. It is unlocked upon obtaining ten kills with the Russian Axe. 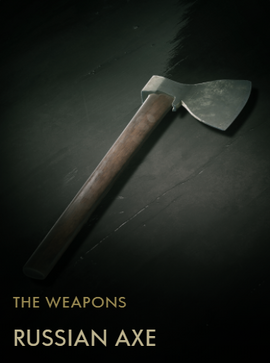 The axe has been an indispensable tool of Russian peasants since centuries back, being used for cutting trees, building houses as well as defense. During WW1, the Imperial Russian Army issued small axes to grenadier units, who had the mission to advance under fire to clear obstacles for the rest of the infantry. Russian Sappers carried out a similar role, wearing a red emblem on the sleeve in the form of a crossed shovel and axe. During the war, the grenadiers developed into trench raiders and specialized assault units.

Retrieved from "https://battlefield.fandom.com/wiki/Russian_Axe_(Codex_Entry)?oldid=343245"
Community content is available under CC-BY-SA unless otherwise noted.