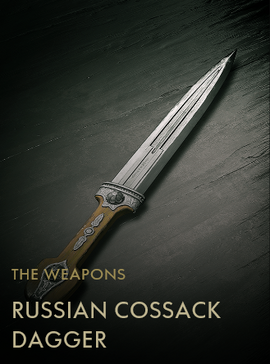 The Russian Kinzhal is a double-edged dagger, typically with a groove on each side of the blade and highly decorated with gold or silver designs, sometimes with embedded gemstones, and the scabbard usually featuring a ball point on the tip. The Kinzhal, under different names, is part of the Georgian men’s traditional national costume and is also worn by Circassian and Don Cossacks, and has been used in Georgia and the Caucasus since ancient times. This shape and type of dagger is similar to the Greek Xiphos, the Roman Gladius and the Scottish dirk. The dagger has its roots far back in history, when ancient warriors realized they needed a short piercing weapon that would be suitable in situations where there wasn’t enough room to use a spear or swing a club. One such example was when Greek warriors of the antiquity fought in a rectangular phalanx order, and needed a reserve weapon with which they could only thrust directly forward. The dagger, up to 40 cm in length, was a one of the most accessible weapons and had become tradition in many parts of the world, and it kept on being worn by the people of Caucasus into the 20th century, even together with a longer saber. Two of Russia’s greatest poets, Alexander Pushkin and Mikhail Lermontov, both wrote poems dedicated to the Kinzhal dagger. Mikhail Lermontov’s “Kinzhal” from 1838 begins with the lines; “I love you, my damned dagger, the comrade is bright and cold.”

Retrieved from "https://battlefield.fandom.com/wiki/Russian_Cossack_Dagger_(Codex_Entry)?oldid=343223"
Community content is available under CC-BY-SA unless otherwise noted.