Not to be confused with the MTAR-21

The ST Kinetics SAR 21 (Singapore Assault Rifle - 21st Century) is a Singaporean bullpup Assault Rifle developed in the early 90s and later adopted by the Singapore Armed Forces in 1999. Designed to counter weaknesses of the SAF's former M16S1 rifle, the rifle uses a modified Stoner operating system with higher reliability and lower recoil than the M16 and is constructed out of high-impact polymer. The SAR 21 MMS (Modular Mounting System) variant replaces the SAR 21's built in sight with a Picatinny rail to allow mounting of various other optics and accessories. The SAR 21 is exported to the United States for police and civilian use by ST's subsidiary VT Systems.

The SAR 21 that appears in the Battlefield series combines the rail system of the MMS variant with the barrel length of the standard variant.

The SAR-21 is an assault rifle featured in Battlefield 4.

The SAR-21 is unlocked by completing the Bronze assignment in the mission Singapore by scoring 11,000 points. It is equipped with a Coyote, Magnifier and Heavy Barrel. It sports an ERDL Woodland finish.

The SAR-21 is the third unlockable assault rifle for the Assault Class, after the M416 and before the AEK-971, requiring 19,000 Assault Rifle score.

It has the highest base stability and lowest recoil of any weapon in the game. To compensate for this, however, it also has the lowest rate of fire of any weapon in the Assault class, and one of the lowest in the entire game, behind the U100 MK5 and the M60E4 making the SAR-21 more difficult to use up close. This low rate of fire does have a few advantages, though; the ADS spread takes much longer to reach its maximum spread, allowing for a longer duration of sustained, accurate fire. The low firerate also conserves ammo, making the SAR-21 best suited for medium to long-range engagements.

It can equip the UGL Rail to allow to mount the M320 grenade launcher, but not the M26 MASS.

The SAR-21 has very light recoil which makes it one of the most stable Assault Rifles in the game. Any inaccuracies lie within its side-to-side recoil, which can be mitigated using the compensator attachment. Due to the barrel whip already being low, a muzzle attachment may be not needed, and this can free up a slot for a Suppressor or Flash Hider, but some players might find it suitable to have a stock barrel.

It is quite usable with any optic, including the longer-ranged options. Which one the player chooses is all based on personal preference.

Any foregrip option also works very well with the SAR-21, as the recoil and spread is low enough to not worry about first shot recoil, so a Stubby Grip is a good choice to mitigate what very little recoil there already is, effectively making the SAR-21 have almost none at all.

Due it having low RPM means it can be outpaced in close quarters by many high fire rate weapons such as the AEK-971 or the FAMAS, but at longer ranges it easily outclasses most weapons in the game, barring DMR's and Sniper Rifles.

After the Fall patch, the missing bullpup modifier is added to the SAR-21, allowing tighter hipfire accuracy and increased movement speed when aiming down the sights. 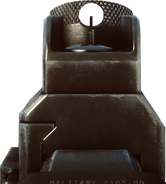 SAR-21 being held by a USMC Assault

Weapon Stats
Add a photo to this gallery

The SAR-21 is a weapon featured in the Battlefield Hardline: Getaway expansion, exclusive to the Operator kit. 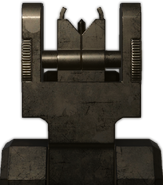 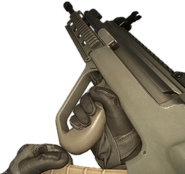 Retrieved from "https://battlefield.fandom.com/wiki/SAR-21?oldid=378388"
Community content is available under CC-BY-SA unless otherwise noted.