< SCAR-H
Edit
watch 02:52
Roblox: DeepWoken - The Loop
Do you like this video?
Play Sound

In Battlefield 4, two variants of the SCAR-H make an appearance in-game: the standard variant, and the long-barreled SCAR-H SV (Sniper Variant). The former makes an appearance as an Assault Rifle available for the Assault kit, while the latter is an all-kit Designated Marksman Rifle.

The SCAR-H is an Assault rifle featured in Battlefield 4.

The SCAR-H is Recker's second (chronologically first) weapon acquired in the campaign. In all missions except Baku, Shanghai, South China Sea, and Kunlun Mountains, Recker always starts with the SCAR-H and the MP-412 REX.

He first starts with it after the initial introduction in Baku, empty and out of reserve ammunition. He can later select it out of weapon crates whenever they are available. Its attachments are the Holographic Sight, Laser Sight, Muzzle Brake, and Angled Grip and has no camouflage equipped.

The SCAR-H is the second unlockable assault rifle, and is unlocked for the Assault class at 4,000 assault rifle score. It offers relatively high power and fair accuracy, but at the cost of magazine size, automatic stability, and rate of fire.

It unlocks the American attachments through kills and the Chinese and Russian attachments through Battlepacks. When first unlocked, the SCAR-H features iron sights which are similar to those of the SCAR-H or MTAR-21's in Battlefield 3 . However, the iron sights are intrusive, and allow little scope outside of the peep hole of the rear sight aperture. This can obfuscate the user's field of view, which can in turn make it difficult to acquire targets.

The SCAR-H stands in the middle between assault rifles and DMRs. With a medium-range optic, it can offer fair distance. However, speaking generally, the SCAR-H tends to be outclassed at close range by most other weapons, and at extreme distances by dedicated marksman rifles and sniper rifles. Its low magazine count and rate of fire makes shot placement crucial, and it tends to run out of ammunition quickly in comparison to the other assault rifles. 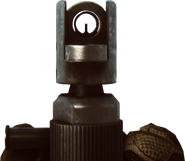 The SCAR-H SV (Sniper Variant) appears in Battlefield 4 as a Designated Marksman Rifle, firing semi-automatic only.

The SCAR-H SV is found as a collectible on the scaffolding in Singapore, underneath the overpass. It comes equipped with an ACOG along with a Flash Hider and Bipod. It sports an Atomic Woodland finish.

The SCAR-H SV is almost statistically identical to the Mk11 Mod 0, with faster empty reload and less tendency to drift right, while the Mk11 Mod 0 has faster velocity and longer maximum range than the SCAR-H SV. 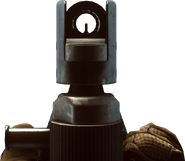