The SOF Combat Assault Rifle-Light, or SCAR-L, is a modular assault rifle made by Belgian small arms company Fabrique Nationale d'Herstal (FN Herstal). This is the light assault rifle variant of the SCAR weapon system, differing from the SCAR-H in that it uses the smaller caliber 5.56x45mm NATO round instead of the Heavy variant's 7.62x51mm NATO round. It uses the NATO standard 30 round STANAG magazines and a number of barrel length variants are available in both calibers.

The SCAR-L is a weapon featured in Battlefield 2 as a Tier Two unlock for the Special Forces Kit. It has marginally more spread than the G36C, as well as a prone modifier of 1.1, making it the only carbine whose minimum spread is unattainable under normal conditions; further, its visual recoil is identical to the M4's. It is marginally more powerful than the G36C and M4, but comes equipped with an optic like the latter carbine.

A render of the SCAR-L in Battlefield 2

A render of the SCAR-L in Battlefield 2 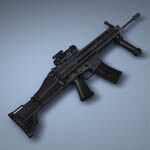 SCAR-H on the map Devil's Perch

Short-mid
"The SCAR assault rifle family consists of a Heavy and a Light type, each available in several versions, with different barrel lengths and ammunition types. This Light model is used by SOCOM forces and was accepted by them as late as 2003. "

The SCAR is a weapon featured in Battlefield: Bad Company.

The SCAR appears as a collectible. It can be found on Welcome to Bad Company, and Acta Non Verba, outside one of the factories while the player is destroying the Russian fuel reserves at the beginning of the level.

The SCAR is the default Compact Assault Rifle for the American Specialist kit. It has low damage and low rate of fire, compared to other Specialist weapons, making kills difficult to achieve. However, compared to other compact assault rifles, it does have good accuracy. It has a 60-round magazine and cannot use iron sights, as aiming simply does a slight zoom and increases accuracy (like all compact assault rifles in game).

The SCAR in Battlefield: Bad Company on the multiplayer level Deconstruction

The SCAR being aimed

[1]
"This Scar Light model is designed for various barrel size modifications and is compatible with a bevy of ammunition types. The rifle's stealthy silencer and frame has made it the weapon of choice of the SOCOM forces."

The SCAR-L Carbine is a weapon featured in Battlefield: Bad Company 2.

The SCAR-L is one of the two compact assault rifles found in the campaign, with the other being the AKS-74u. It can be found as a collectible in the level Crack the Sky and Zero Dark Thirty. It can also be found with a 4X Rifle Scope in Crack the Sky.

The SCAR-L Carbine is the second compact carbine issued to the Engineer Kit, requiring 2,510 experience points to unlock. It has low to medium recoil, a low rate of fire and high damage. Compared to some of the other Submachine Guns, it can be very effective at longer ranges.

It can be used similarly to an Assault Rifle, and its low rate of fire prevents overwhelming recoil. Like the other weapons issued to the Engineer Kit, it is fitted with a suppressor. It has very similar stats to the starting Engineer weapon, the 9A-91 Avtomat. The SCAR-L has 10 more rounds and more open iron sights, at the cost of sharper recoil and slightly more spread.

The SCAR-L at Heavy Metal in Conquest.

The pre-release look of the SCAR-L 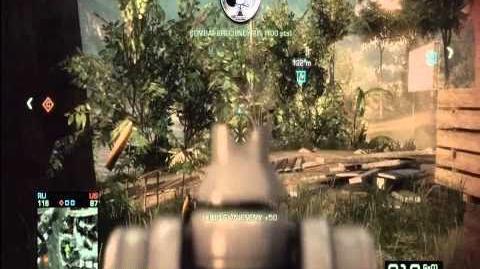 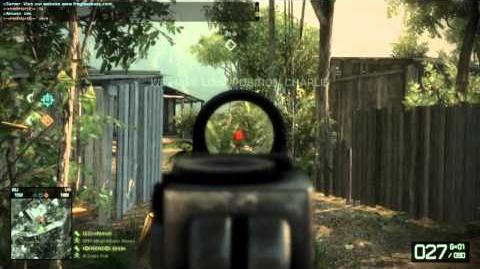 Scar-L Gameplay and Review (Bad Company 2)
A gameplay, review, and recoil test video for the SCAR-L in Bad Company 2

The SCAR-L is a weapon featured in Battlefield Play4Free as a purchasable weapon for the Assault Kit. It features medium damage, high accuracy and range, high recoil, and a fast fire rate. It costs 1469

to last forever and is unlocked at level 6.

Despite being able to be fired fully automatic, this weapon is best used when fired in short bursts at long range because of its higher recoil. Like most other assault rifles, this weapon sports a black paint scheme.

The SCAR-L at Oman on the USS Essex in Battlefield Play4Free.

Close up view of iron sight

More detailed look upon the SCAR-L in Battlefield Play4Free

Complete Set Us Up The Bomb assignment

[1]Retrieved Sept. 13th
[2]
"The SCAR rifle system’s modularity allows for many different configurations. The Mk. 16 “SCAR-L” features a 14 inch barrel as well as a full 30 round magazine. Compared to its 20 round carbine counterpart, the heavier Mk. 17, the SCAR-L provides greater target acquisition at longer ranges due to the extended barrel length as well as more controlled fire due to manageable recoil."

The SCAR-L is a weapon introduced in the Battlefield 3: Close Quarters expansion and is unlocked upon the completion of the Set Us Up The Bomb assignment. It was first seen in the killfeed during the Battlefield 3: Close Quarters Gameplay Premiere Trailer, although it was misspelled as SCARL-L. The gun itself is seen for the first time in a player's hands in the Donya Fortress Gameplay Trailer.

The SCAR-L performs much like any other assault rifle in its class, and deviates from its carbine counterpart both in statistics and aesthetics. The SCAR-H has the upper-hand in damage, but the SCAR-L compensates with less damage drop-off at range and a larger magazine. Furthermore, while the SCAR-H has very potent recoil, the SCAR-L has almost none (although it does have a highly unusual 2.75 1st shot multiplier, making accurate short bursts difficult at longer ranges).

Some visual differences to the heavy variant include a more grayish color and duct tape wrapped around the stock. It is available to the Assault Class, and is capable of mounting underslung weapons such as the M320 or the M26. The SCAR-L is the only assault rifle capable of mounting a Ballistic Scope.

It should also be noted that the SCAR-L also has the unique advantage of having one full extra magazine over other assault rifles, meaning that the player has more ammo before running out. Out of all the available assault rifles and carbines featured in the game, it has the most ammunition.

One big disadvantage that SCAR-L user may notice is its very low rate of fire of 620 RPM, which make it difficult to outgun the weapon with higher rate of fire. However the SCAR-L has mild kick and good accuracy over long bursts, making it suitable for mid-range engagement, where fast-firing weapon may find trouble to land accurate shots.

The release of Battlefield 3: End Game introduced the SCAR-L Specialist assignment which unlocks the Desert Stripe and Digital Woodland camouflages upon completion.

The SCAR-L in the killfeed.

High Quality Render of the SCAR-L