The SG553 is a slightly improved version of the SG552, the compact version of the SIG SG550, the standard rifle of the Swiss Army. It fires the 5.56x45mm NATO round from a 5, 10, 20 or 30 round magazine at 700 RPM. The SG553 was made for more urban environments, where its shorter length makes it a formidable close range tool. Even with its short barrel, the rifle is highly accurate out to ~200–250 meters.

http://symthic.com/?s=bf3 Retrieved Sept. 17th
"A Carbine variant of the Swiss Army's standard SG550 rifle, the SG553 improves over its predecessor the well-known SG552 by including integrated rails for mounting accessories. A Carbine with excellent ergonomics, the SG553 is capable of Automatic, 3 Round Burst, and Semi-Automatic fire and is an excellent close range weapon."

The SG553 was listed on the four page fact sheet released by EA at Gamescom 2011. It was also seen in Battlefield Blog #8 as an example of the weapon customization in the game, sporting various attachments.

In Singleplayer, the SG553 appears in the hands of a GIGN officers during Comrades, and one with no attachments is encountered near the end of The Great Destroyer. The SG553 has high damage and high rate of fire with virtually nonexistent recoil; it is far more manageable than most other automatic rifles even on full auto.

The SG553 is unlocked for multiplayer when an overall score of 120,000 points in Co-Op mode is reached. Formerly (before the R3 patch), 378,000 points were required to be achieved in Co-Op. It is the sixth weapon unlocked from Co-Op. It features a 30-round magazine and is capable of fully automatic, 3-round burst, and semi automatic fire. Due to its low recoil, the gun performs well at medium and close ranges. Much of the recoil this gun has is somewhat strong rightwards recoil, which is greatly helped by using the Foregrip attachment, which significantly reduces this sideways recoil. The Heavy Barrel attachment can help with its slow muzzle velocity to increase its long range potential. Overall, the SG553 is an excellent weapon and is ideal for aggressive gameplay on the move.

The iron sights on this weapons are clear and easy to use; therefore, this gun may be a good match for those who prefer to use iron sights.

The SG553 in the singleplayer level Comrades.

An SG553 with ACOG and Bipod (up) and an SG553 with Holographic Sight, Foregrip and Suppressor (down).

SG553.
Add a photo to this gallery

The SG553 returns in Battlefield 4

The SG553 is unlocked by completing the Silver assignment in Shanghai by scoring 7000 points. It features a Reflex, Magnifier and Heavy Barrel. It sports an ERDL Naval paint.

The SG553. the third Carbine to be unlocked, after the ACW-R. It sports a high firerate of 830 RPM, second only to the ACW-R. Despite its significant firerate, the recoil is comparatively low, enabling the SG553 to remain very accurate when fired in short bursts. This is further helped by the very open and easy to use iron sights.

SG553 unlocks the US attachments through kills, while the Russian and Chinese variants must be unlocked through battlepacks.

The SG553 as seen in the Gamescom Livestream. 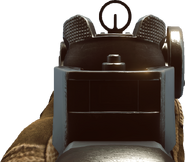 Hitting the bolt-release.
Add a photo to this gallery

The SG553 is a carbine featured in Battlefield Hardline as a purchasable primary weapon for the Law Enforcement Operator.

Similar to the G36C, the weapon is well rounded and can function well at most ranges, but it fires slightly faster than the G36C at the cost of lower weapon stability, gearing it more towards closer engagements.

By default, the SG553 is equipped with the SRS 02 reflex sight.

SG553
Add a photo to this gallery

The sightless SG553 in Comrades.

Retrieved from "https://battlefield.fandom.com/wiki/SG553?oldid=367584"
Community content is available under CC-BY-SA unless otherwise noted.