The SMLE MKIII is a Codex Entry featured in Battlefield 1. It is unlocked upon obtaining 10 kills with the SMLE MKIII. 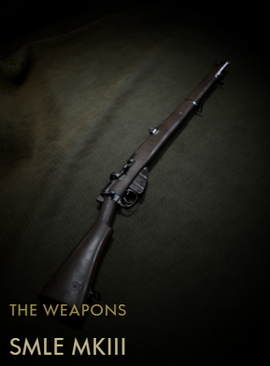 The British SMLE rifle is one of the longest-serving military rifles ever, having been adopted in 1895 and remaining the standard service rifle until 1957. As a sniper rifle, the SMLE stayed in official service until the 1990s, and even today it is still the standard rifle in some nations. The legendary MK III version was introduced in 1907 and served through WW1.

Sometime pronounced "Smelly", it has a smooth and quick bolt action. Together with the unusual feature of a detachable 10-round magazine, it allowed a well trained rifleman to perform the "mad minute", firing 20 to 30 aimed rounds in 60 seconds.

In 1914, a British musketry instructor set the current world record for aimed bolt-action fire, placing 38 rounds into a 300-mm-wide target at 270 meters in one minute. This action and training led to German troops sometimes believing they were facing machine gun fire when in fact they were repelled by a group of riflemen with SMLEs.

Retrieved from "https://battlefield.fandom.com/wiki/SMLE_MKIII_(Codex_Entry)?oldid=343131"
Community content is available under CC-BY-SA unless otherwise noted.