The Springfield Armory M1A SOCOM 16 is a civilian sporting variant of the M14 rifle chambered in 7.62x51mm NATO. The weapon is rather compact for a rifle, using a 16-inch barrel. The rifle also features a reworked gas system to account for the shorter barrel as well as a compensator to dampen recoil.

0.6
15
"The SOCOM 16 is a modern variant of the M14, manufactured with lighter materials. This rifle mitigates some recoil, allowing for rapid follow-up shots."

The SOCOM16 is a semi-automatic Sniper Rifle featured in Battlefield Hardline, exclusive to the Law Enforcement Professional kit. It has the lowest recoil in its class, allowing it to fire quickly while remaining mostly on target. 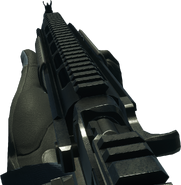 The SOCOM 16 in resting position.

Iron sight.
Add a photo to this gallery
Retrieved from "https://battlefield.fandom.com/wiki/SOCOM_16?oldid=364013"
Community content is available under CC-BY-SA unless otherwise noted.