Mk 11 is the United States Marine Corps designation of the SR-25 and its modernized version, the M110 (alternatively Mk11 Mod 2) is a semi-automatic sniper rifle based on the famous AR-10 designed by Eugene Morrison Stoner. It fires the 7.62x51mm NATO round from a 10 or 20-round box magazine. 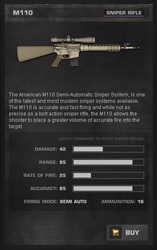 http://symthic.com/?s=bf3
"Essentially an M16 chambered for the heavy 7.62mm NATO caliber the Mk 11 Mod 0 features a longer, heavier, free-floating barrel, enhanced rail system and provisions to mount a sound suppressor. Everything about the Mk 11 Mod 0 is designed to enhance accuracy and provide a squad long range, accurate, Semi-Automatic fire. The Mk 11 Mod 0 is equipped with a Rifle Scope (8x) by default."

The SR-25 EEC is a weapon featured in Battlefield Hardline.

Retrieved from "https://battlefield.fandom.com/wiki/SR-25?oldid=269317"
Community content is available under CC-BY-SA unless otherwise noted.