Not to be confused with the 338-Recon
The FD338 is an American semi-automatic sniper rifle manufactured by F&D Defense. It is chambered for the .338 Lapua Magnum cartridge and is based on the AR-15 platform used by the M16. It runs on a variable tuned gas pull system and has a maximum range of 1,500 yards (1371.6 metres).

The SR338 is a semi-automatic Sniper Rifle introduced in the Battlefield 4: Naval Strike expansion, and is the only semi-automatic sniper rifle in the game (aside from the M82A3 Battle Pickup). It is unlocked upon completion of the Always Deadly assignment.

The SR338 differs greatly from most sniper rifles in the game by sharing many qualities with the DMR class of weapons, having very similar stats to weapons such as the RFB, Mk 11 Mod 0, or M39 EMR. However, unlike these DMRs, the SR338 is equipped by default with an 8x Rifle Scope and can unlock other high-power scopes. 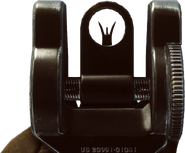 Retrieved from "https://battlefield.fandom.com/wiki/SR338?oldid=363995"
Community content is available under CC-BY-SA unless otherwise noted.