The CheyTac M200 Intervention is an American bolt-action sniper rifle manufactured by CheyTac LLC. It fires the .408 CheyTac or .375 CheyTac cartridge.

The SRR-61 is a weapon featured in Battlefield 4. The weapon uses a 7-round magazine. The .408 CheyTac cartridge of the SRR-61 has the least bullet drop among sniper rifles due to superior aerodynamics, but the high mass of the round results in a slightly reduced muzzle velocity when compared to the .338 Lapua Magnum fired by the M98B.[1]

Compared to all other rifles in the game, the SRR-61 has the longest range, which is further complemented with the addition of a ballistic scope. This also contributes to the weapon's low bullet drop, making it ideal for dispatching targets at extremely long ranges. 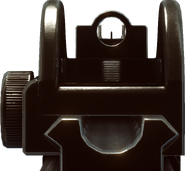