The Smart Target Activated Fire and Forget (STAFF) Shell is a tank round designed to increase hit probability and damage by firing an explosively formed penetrator onto the top of an armored vehicle. The round acts like a regular shell for most of its flight. When it detects an incoming target, it orients itself and fires the penetrator.

• Self-guided "Fire-and-Forget" anti-tank shell
"A 120mm shell with a smart warhead that will identify enemy targets and explode above them for a critical hit."

The STAFF Shell is a secondary armament for main battle tanks in Battlefield 4.

The weapon is a special dumb-fired fire-and-forget-type shell that automatically identifies, targets and guides itself towards the closest enemy or unoccupied ground vehicle. For greater accuracy, the operator of the shell must also compensate for distance and range by leading the target when required. The STAFF shell will fail to achieve lock and guidance if the target is either out of range, too close to the launch source or if the target is out of optimal lock-on proximity of the shell.

Unlike the Guided Shell and similar weapons, the fire-and-forget nature of the STAFF Shell allows the operator and the launch vehicle some time to tend to their surrounding environment to identify and counter any ground or aerial threats, or to enter tactical advance or retreat across the battlefield. Like similar weapons such as the MBT LAW and Active Radar missiles and in stark contrast to the Guided Shell, the operator is not required obtain nor maintain weapon lock on the target prior or after shell launch. It does not require the division of attention from the operator which may leave them vulnerable to enemy action. It also has no initial “target locking…” requirement like the Guided Shell or FGM-148 Javelin to warn or inform the target of the incoming shell and its launcher vehicle's presence. The missile will skip straight to 'target tracking' mode once within optimal proximity between the target and the launch vehicle, which is usually when very close to the target, performing a direct top-down attack once within optimum attack proximity. When target is tracked, this leaves very little time for targeted ground vehicles to react, as many drivers are accustomed to deploying counter measures or evasive maneuvers after missile or shell are locked and fired rather than before, dealing a critical mobility hit against most targets without the presence of Reactive Armor.

The STAFF Shell, due to its nature, also has some shortcomings. Due to the fact it takes up the secondary weapon slot of the vehicle, the vehicle operator will be unable to equip more anti-infantry oriented weapons such as Coaxial machine guns or Canister Shells. However, it makes up for this role by increasing the anti-vehicle capability of the operating vehicle. To compensate for the lack of anti-infantry capability, the vehicle operator can choose to equip 120mm HE Shells with their increased power against infantry, hiring a secondary gunner or switching to the secondary gunner seat themselves for a limited time to dispatch infantry before switching back to the driver seat. When combating low flying aircraft, the STAFF Shell can be utilised in a similar fashion to that of regular armor-piercing shells and fired straight towards, and incapacitating the target upon contact.

The STAFF Shell can be countered by Active Protection and IR Smoke screen systems when activated prior to launch or prior to missile tracking. The shell can also be intercepted or obstructed by walls, buildings or other level decals. The STAFF shell whilst in-flight can leave a particularly blatant exhaust plume and missile streak which can be easily identifiable, especially vehicles equipped with secondary weapons or specializations which contain a magnification/zoom-in ability (such as Zoom Optics), where it makes visually spotting the incoming shell from a further distance easier and thus, targeted vehicle drivers and pilots can act accordingly.

Before it was patched, the STAFF Shell has an independent reload timer, much like the Canister Shell had early in the run of Battlefield 3. It could be fired shortly after switching from the primary shell type without needing to wait for the rounds to be swapped. Its reload time is now correctly linked to the other shell. Also the damage of the STAFF Shell has its damage reduced after patch, doing about the same damage as Sabot Shell; however, unlike the other tank shells, the STAFF shell will always do the same damage as it always targets the top of the vehicle.

The following is a list of effects and damage to specific vehicle types from impacts by the STAFF Shell. Vehicles not listed are vehicles which are instantly destroyed upon shell impact at any angle. Such includes Jets of all Types, Quad Bikes, and PWCs

All damage results are gathered from direct-top shell impacts on all vehicles, as how the shell operates under normal conditions. If not, damage is consistent at all angles of direct impacts.

HUD icon of the STAFF Shell 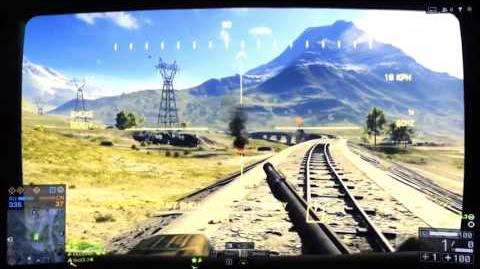 Retrieved from "https://battlefield.fandom.com/wiki/STAFF_Shell?oldid=358317"
Community content is available under CC-BY-SA unless otherwise noted.