Battlefield: Bad Company Official Prima Guide
"An upgrade of a successful sporting rifle, this high precision sniper rifle was built intentionally for domestic Russian use, such as the Spetsnaz forces, counter-terrorist forces and other law enforcement groups. The weapon features a detachable scope and a special plastic magazine."

The SV98 is a sniper rifle featured in Battlefield: Bad Company.

In multiplayer, the SV98 is the default sniper rifle for the Russian Recon kit. The weapon, like all bolt action rifles in-game, kills in a single headshot or a chest shot in close range and two shots to the body at long range. The weapon has a 7x scope attached by default. It also has some bullet travel time at long ranges. The M24 is its American equivalent and the GOL rifle is its MEC counterpart. 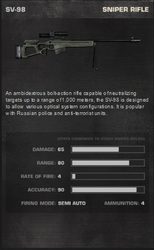 The SV-98 appears in Battlefield 4.

In the campaign, the SV-98 is the standard sniper rifle of the RGF. It is equipped with a PKS-07, Range Finder, Muzzle Brake and Straight Pull Bolt. It sports an ERDL Woodland finish.

The SV-98 is unlocked at 13,000 sniper score. It features a middling RPM, velocity, maximum range and reload time. The SV-98's dominant feature is its tightest hip-fire spread compared to the other sniper rifles. It also features the fastest bullet drop, along with the Scout Elite.

Retrieved from "https://battlefield.fandom.com/wiki/SV-98?oldid=271152"
Community content is available under CC-BY-SA unless otherwise noted.