Upon introduction, it had beat out all other contestants and was accepted into service with the Soviet Military with serial production beginning in 1964. It uses the 7.62x54mmR cartridge in a 10-round magazine. This ammunition is the same type used in the Mosin-Nagant; the weapon the SVD replaced. It has an effective range of 800 meters and a maximum range of 1300 meters with its standard-issue PSO-1 scope.

The SVD is a weapon featured in Battlefield Vietnam is used by the North Vietnamese Army and is issued to their scout kit. It comes with a ten-round magazine with two magazines in reserve, and is equipped with a PSO-1 sniper scope with 6x magnification for long-distance engagements. It is a generally powerful rifle, capable of killing in two body shots or (optimally) in a single head shot. It is the counterpart to the M21 used by the USMC and ARVN, firing with a decent rate of fire and high damage, but with high recoil and a fairly long reload rate.

The SVD as it appears in Battlefield Vietnam

The SVD view through its PSO-1 scope, showing the unique PSOP reticle seen in the PSO-1

The kit symbol
Add a photo to this gallery

"The SVD is a lightweight rifle used for mid-range sharp shooting. It's slightly less accurate than its American counterpart but shoots significantly faster"

The SVD is a weapon featured in Battlefield 2 for the MEC Sniper kit. Like the Type 88, the SVD is a semi-automatic sniper rifle with a ten-round magazine and a fairly high firecap. Its spread values are identical to the other sniper rifles, but as with the Type 88 its damage is only 45, whereas the bolt-action rifles have a damage value of 95. It can thereby, depending on shot placement, take as many as four rounds to kill an enemy, although a single headshot is an instant kill.

In Battlefield 2: Special Forces, it is the default sniper rifle for the MEC Special Forces, Russian Spetsnaz, Rebels and Insurgents. It remains the same from base game.

The SVD in Battlefield 2

The SVD's model in Battlefield 2 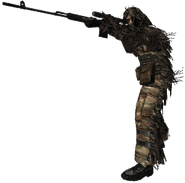 The SVD is a weapon featured in Battlefield 2: Modern Combat, known as the Dragunov SVD DMR. It is the standard sniper rifle issued to the MEC Recon kit. It has high firepower and good accuracy, but a low rate of fire.

The SVD in Battlefield 2: Modern Combat.
Add a photo to this gallery

The icon for the SVD.

The render of the SVD. 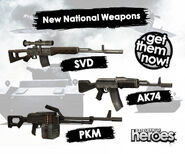 Promotional image featuring the SVD.
Add a photo to this gallery

"Super shiny SVD to show off to your friends!"

The render of the Golden SVD.
Add a photo to this gallery

[1]
"Widely used in the former Warsaw pact countries with an effective range of 800 meters. This semi-automatic marksman rifle is intended to be used as part of regular infantry, unlike dedicated sniper rifles."

The SVD is a weapon featured in the Battlefield: Bad Company 2: Vietnam expansion and is issued to the Recon kit. It is a semi-automatic sniper rifle with a 10-round magazine. Like most weapons in the expansion, it has seen heavy usage and also has a palm branch tied to the hand guard as an attempt to use camouflage.

It is identical to the M21 in stats. However, it sports a significantly stronger default scope zoom, making the SVD preferable for long range engagements. They are, in almost all aspects other than appearance, exactly the same when a 12X High Power Scope is equipped. Players tend to dislike the SVD, as its high recoil and low damage are not ideal for the long ranges that its scope is designed for. It is much more effective in Hardcore though, as it will only require two shots to kill at any range, instead of 3-4 in normal modes. 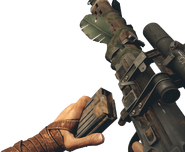 Aiming down the default scope.

Aiming down the 12X Zoom Scope.

The furthest an enemy can be for the SVD to do its maximum damage at 12m.

The closest an enemy can be for the SVD to do its minimum damage at 64m.

alchemical.cc
"Widely used in the former Warsaw pact countries with an effective range of 800 meters. This semi-automatic marksman rifle is intended to be used as part of regular infantry, unlike dedicated sniper rifles."

The SVD is a weapon featured in Battlefield Play4Free as a purchasable sniper rifle for the Recon Kit. Due to its semi-automatic nature, it has a higher rate of fire when compared to bolt-action sniper rifles, but has lower damage, requiring 3-4 shots to kill with moderate recoil. It also uses a 14-round magazine and the same scope reticle as the SV-98.

The SVD in Battlefield Play4Free.

The view through the SVD's scope.

An render of the attached scope

Elite Paint
Add a photo to this gallery

http://symthic.com/?s=bf3
"Designed as a squad support weapon, the SVD Dragunov enhances a squad’s ability by providing long range, rapid, accurate Semi-Automatic fire. Although the SVD looks similar to an AK style weapon, these are merely cosmetic. When paired with specially designed sniper cartridges the SVD Dragunov is a deadly and accurate marksman weapon. The SVD is equipped with a standard PKS-07 (7x) scope."

The SVD is a weapon featured in Battlefield 3.

The SVD can be picked up in Exfiltration with an IRNV scope.

The SVD is the default weapon for the Russian Ground Forces Recon kit in multiplayer. It is very accurate, and can kill in 2-3 shots to the body, or one headshot (Dependent on range, at least 2 shots are required at further range). It is shown with a new ability to have a rail mount attached to the side brackets, which allows for the rifle to use different types of scopes, gun sights and optics. It can also use laser sights and has the ability to mount a bipod. The SVD comes equipped with a PKS-07 7x scope by default, but can also use its standard PSO-1 4x scope as the first unlock obtained and as with all sniper rifles in the game, can use iron sights.

The SVD is unlocked by default, it is unique to the Russian Army like the Mk11 Mod 0 is to the United States Marine Corps. The SVD is equal in every statistic with the Mk11 Mod 0 except for having a lower muzzle velocity and a slower reload time. Statistically there isn't one value that the SVD possesses that any of the other semi-automatic rifles (except the M417 and SKS) don't either do as well or better. It has a 10+1 magazine and is best suited for medium to long range as a way to extend the effective combat range of a squad. It can also be used at closer ranges with a 4x scope or iron sights equipped. It is later unlocked for both factions, like the Mk 11 Mod 0, at 195,000 Recon points.

The SVD as it appears in-game.

Left side of the SVD

The SVD model in various angles.
Add a photo to this gallery

Retrieved from "https://battlefield.fandom.com/wiki/SVD?oldid=377682"
Community content is available under CC-BY-SA unless otherwise noted.