Not to be confused with the SVD

The SVK-12 is a proposed DMR variant of the AK-12 series. It is chambered in the heavy-hitting 7.62x51mm NATO round, with a ten to twenty-round capacity. Various barrel lengths are available in this modular system. The SVK-12 appears in Battlefield 4 as the SVD-12.

The SVD-12 is a weapon featured in Battlefield 4.

The SVD-12 is unlocked by completing the Gold assignment in Baku by scoring 6,000 points. It features a PSO-1 and Angled Grip and sports a Worm Urban finish.

It is the fourth DMR to be unlocked, having a rather low recoil, medium fire rate and good damage, being able to kill all infantry targets at any range with 3 shots maximum.

It distinguishes itself amongst the DMRs by having exceptional accuracy, only matched to the Mk11 Mod 0 and SCAR-H SV, while having the second highest velocity, albeit lower than the RFB, and lower spread increase per shot. This however, comes at the price of only having a capacity of 15+1 rounds. Unlike most other DMRs, the SVD-12 tends to drift left rather than right.

The SVD unlocks the Russian attachments by default, and can acquire the US and Chinese variants through Battlepacks. 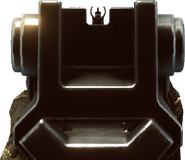 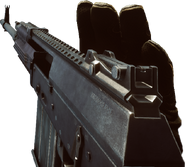