The SVU (Russian: Снайперская винтовка укороченная, Snayperskaya Vintovka Ukorochennaya; English: Sniper Rifle Shortened) is a Russian designated marksman rifle designed in the early 1990s. It is the result of a modernization project of Dragunov's SVD, and was developed into a bullpup design. It uses an integral suppressor and fires 7.62x54mmR rounds fitted in a 10 or 20-round detachable box magazine. A variant of the SVU, known as the SVU-A was developed in 1991, which was a selective fire rifle, capable of both semi and fully automatic fire modes.

The Dragunov SVU is a weapon featured in Battlefield 2: Modern Combat as the standard sniper rifle issued to the EU Recon kit. It has high firepower and good accuracy, but a low rate of fire.

Reloading the SVU.
Add a photo to this gallery

Battlefield: Bad Company Official Prima Guide
"A bullpup version of the classic SVD design, this weapon is shorter and incorporates a suppressor. It can be used with its built-in iron sights, although the common setup features a scope. The SVU was designed with Russian law enforcement forces in mind. "

The SVU is a semi-automatic sniper rifle featured in Battlefield: Bad Company, equipped with an internal suppressor and a 10-round magazine.

The SVU is first available in the level Crossing Over, at a Serdaristani military base down the road from the first radio tower. It is a good choice for engaging enemy soldiers at longer ranges, and its silencer attachment can be very useful when trying to engage hostiles stealthily. The SVU also comes with a MP-443 pistol, which can be very useful if the player is caught at close range.

The SVU costs one unlock point for the Recon kit. It is very useful when eliminating single players, thanks to its silencer, but its lower damage than bolt-action sniper rifles, as well as a low fire cap, can cause it trouble when trying to thin out larger numbers of enemy players, despite it being semi-automatic.

The SVU in Battlefield: Bad Company on the multiplayer level End of the Line

The SVU's scope.
Add a photo to this gallery

"Sacrificing stopping power and accuracy the bullpup design is based on the Dragunov SVD. The SVU was originally designed for Russian airborne but was adopted by police forces for urban operations."

The SVU Snaiperskaya Short is a weapon featured in Battlefield: Bad Company 2 as the fourth sniper rifle issued to the Recon Kit. It requires 15000 points to unlock and is equipped with an internal suppressor. It kills in four shots to any body part, and while very accurate, is one of the weaker sniper rifles in the game; at longer ranges it will take 2 head shots to achieve a kill. The SVU is better suited to a designated marksman role, as opposed to the more traditional sniper role the bolt action rifles afford. With a Red Dot Sight or 4x Scope attached and Magnum Ammunition equipped, the weapon becomes a powerful, accurate and untraceable medium-long range weapon, offering the user the benefits of a less visible vapor trail because of the suppressor. 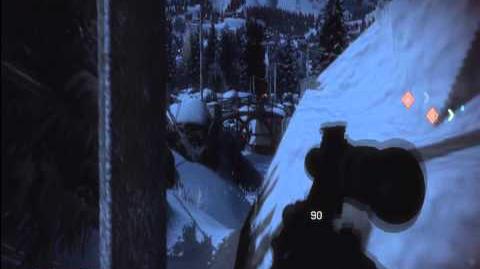 The SVU Snaiperskaya Short at Atacama Desert in Rush.

The view through the SVU Snaiperskaya Short's scope.

The furthest an enemy can be for the SVU to do its highest damage at 8m.

The closest that an enemy can be for the SVU to do its lowest damage at 64m.

SVU with default zoom mounted.
Add a photo to this gallery

The SVU-A is a sniper rifle featured in Battlefield Play4Free. This version of the SVU is unique in that it features a fully automatic fire rate from a 16-round magazine. The weapon also has low recoil due to its attached muzzle brake and bullpup configuration. However, the weapon comes with a hefty price of 980

, as well as it's attached scope having a very low power magnification to keep it balanced among other snipers and avoid unmanageable recoil due to its fully automatic nature.

Even with its low recoil, the SVU-A can throw a user off their target at medium to long ranges. Because of this, and the weapon's high fire rate for a sniper rifle, it is advised to use short bursts when firing unless at close range. The weapon's high power makes it far more useful than the SVD for Recon players that want a sniper that performs better in close quarters, though it can only be purchased with Battlefunds, meaning players will have to shell out actual money to purchase the weapon rather than in-game Credits like for the SVD. Being an Elite weapon, the SVU-A has a black and tan paint scheme, however its attached scope is painted gray. 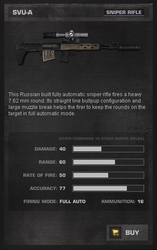 The view through the SVU-A's scope. 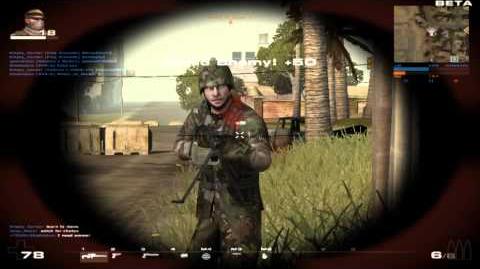 Retrieved from "https://battlefield.fandom.com/wiki/SVU?oldid=364006"
Community content is available under CC-BY-SA unless otherwise noted.