A Sabot Shell is a tank round consisting of a high density, dart-like kinetic energy penetrator (KEP), propellant, and a sabot (shoe). The sabot itself is a shroud that aligns and guides the KEP through the cannon barrel, allows it to be propelled, and separates from the KEP after exiting the barrel. The KEP is typically made of materials such as tungsten or depleted uranium, and imparts destructive power primarily through momentum alone. Secondary damage may be caused by heat and pressure imparted onto the penetrated armor and the KEP itself.

Examples of such a weapon include the American M829 APFSDS. The basic design is emulated in other munitions such as the 25mm APFSDS-T Shell and 12 Gauge Flechette shells.

The Sabot Shell may have been used throughout the campaign mission "Thunder Run". Though the display indicates an AP round is in use, Ingham (the loader for Miller's crew) states that sabot rounds are loaded. Indeed, the tank rounds in this mission do not follow the same ballistic path of regular AP rounds.

8 seconds
"A shell without an explosive payload that travels at an increased velocity compared to other shells of the same caliber.

Like all other tank shells, unguided rockets and rocket/missile launchers, it has the capability of damaging and destroying structures such as walls and levelling some buildings. The shell has an acceptable and predictable trajectory and shell velocity which allows the vehicle operator to engage both ground and aerial targets effectively at close to long-range with ease. The Sabot shell deals moderate damage upon impact with heavy and light-armored targets, dealing roughly the same amount of damage as 120mm AP Shell. After the recent Battlefield 4: Community Operations update, the Sabot Shell's direct-damage output now supersedes the 120mm HE Shell.

Unlike the HE and AP shell, the Sabot shell carries no explosive payload, but in turn has a higher velocity and lower shell drop with lower blast power and radius than the 120mm HE Shell and AP Shell.

The Auto Loader vehicle Specialization reduces the time taken to reload between shots. All shots of the shell are negated upon activation of Active Protection systems of the targeted vehicle, while Reactive Armor requires impacts to deal higher damage to count as critical, retain mobility.

To operate, the vehicle operator must select the primary weapon of the Main Battle Tank. The circular HUD icon and text display on the bottom left-hand side of the screen will indicate when or whether the primary weapon and shell is equipped, ready to fire, or reloading. Once selected, the operator must aim and fire at the target with the primary fire button. Depending on the range and movement, the operator of the Sabot Shell must also compensate by either leading the target or adjusting cannon elevation. Striking armored targets directly at a 90 degree angle either at the front, side or rear can produce different results with varying damage. Striking most light-armored targets at a 90 degree angle at any side of the vehicle usually produces a critical hit, especially when Reactive Armor is not present while impacts other than 90 degrees will often deal less damage. For action against Main Battle Tanks, 90 degree impacts at the front deals the weakest amount of damage and no critical hits regardless of angle and presence of Reactive Armor. 90 degree impacts against the side armor deals medium damage and critical hit depending on presence of Reactive Armor. Direct impacts towards the rear of all MBT at a 90 degree angle deals the most damage and will result in a Mobility Kill regardless of presence of Reactive Armor. All Main Battle Tanks can be dispatched with as little as 2 Sabot rounds to the rear with this method.

When focusing on a more anti-vehicle, anti-armor-orientated combat role, the operator may choose to equip STAFF Shells or Guided Shells for ease of engagement of vehicles at longer ranges while coupled with the effectiveness of the Sabot Shell, with the later specialization able to lock-on to laser-designated targets for a damage boost, or to combat against aerial threats more effectively. To compensate for the lack of infantry-orientated weapons, the vehicle operator can choose to employ a secondary gunner, or in more convenient (or desperate) situations, switch to the secondary gunner position themselves temporarily to dispatch hostile infantry before switching back to the driver seat or to employ the Sabot shell itself as a last resort. When targeting hostile vehicles head on, activate Active Protection systems (if equipped) at the right moment can mean the difference between victory or defeat. The driver or secondary gunner can also, if equipped, choose to exit the vehicle quickly, select a dumb-fire rocket launcher (preferably an RPG-7V2 or similar), fire at the target then re-enter the vehicle as quickly as possible before the enemy armor completes their reload/attack phase. When executed correctly, this can deal an extra damage boost between primary weapon reload of the cannon, with the next or second shot of the Sabot shell usually resulting in target destruction.

After the introduction of the Battlefield 4: Community operations update, a direct hit against Helicopters of all types will no longer result in instant target destruction however, will result in a Mobility Kill and critical disable of the target. A short burst of the driver's Coaxial Heavy Machine Gun or secondary gunner's machine gun will ensure target destruction. The increased velocity of the shell compared to others makes dispatching aerial threats easier.

For a more infantry-orientated role, the operator of the vehicle and shell can choose to equip an assortment of Coaxial weapons, enabling to dispatch pockets of infantry resistance with relative ease while the main cannon is reloading. The Canister Shell specialization can also be employed for similar situations however, it is effected by the primary reload of the Sabot Shell. The Sabot Shell's lack of splash damage however, which is present on other shells, increases the difficulty of engaging hostile infantry head on with the Sabot. All in all, the Sabot Shell is the move effective at engaging enemy vehicle targets and utilised as a long-range 'sniper-rifle'-like weapon. Due to its effectiveness, it is by far the most popular primary weapon choice for MBT operators who excel at long-range engagements.

The following is a list of damage and effects on vehicles after a direct 90 degree impact by the Sabot Shell. Vehicles not listed are vehicles which are instantly destroyed upon shell impact at any angle, including Jets of all types, Quad Bikes & PWCs.

Damage result from impacts at an angle other than 90 degrees are not listed due to slight variations of damage at different angles of degrees of shell impact excluding aerial vehicles, as damage resulting from impacts are consitent at any angle.[1]

Sabot Shell as it appears in the vehicle-loadout specialization selection screen. 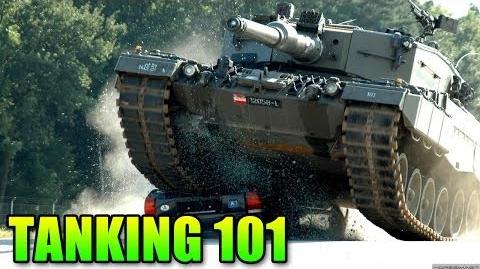