For the sniper rifle of the same name, see Saiga 308
The Saiga 12K (Сайга 12К) is a Russian 12-gauge Combat Shotgun available in a wide range of configurations. Its firing mechanism is heavily based on the Kalashnikov assault rifle design and thus they share many similarities. The weapon also comes in a 20-gauge variant called the Saiga 20K. The Saiga-series of weapons includes sporting and hunting rifles in various calibres.

3
"Imagine an AK-47 limited to semi-automatic fire with a rebuilt chamber to house shotgun shells and you have this automatic shotgun. Extremely powerful at short range it loses accuracy at longer ranges."

In Battlefield 2, the S12K is the default weapon for the Engineer kit for the MEC team. It is magazine-fed and semi-automatic, with its damage on the low end of the spectrum for shotguns. Unlike the other shotguns, it is incapable of killing in a single round even at close range, although it is magazine fed and hence has one of the lower reload times in its class.

The S12K in Battlefield 2

An model of the S12K in Battlefield 2

An model of the S12K in Battlefield 2

The S20K is a semi-automatic shotgun featured in Battlefield: Bad Company.

In Battlefield: Bad Company's singleplayer, the S20K is the Russian and Serdaristani forces' standard shotgun, and can be found in every singleplayer with the exception of Ghost Town. When picked up by the player, it is paired with a set of five HG-2s.

In multiplayer, the S20K is the default shotgun for the Russian Demolition Kit and is the first semi-automatic shotgun available to the player. It has an 8-round magazine and can kill within 3 or so shots. The S20K has a faster rate-of-fire compared to the USAS-12, but like the other shotguns, it is limited to a very short range.

The S20K in Battlefield: Bad Company on the multiplayer map Deconstruction

The S20K being aimed
Add a photo to this gallery

[1]
"A Russian made 20 gauge, semi-automatic shotgun, similar in appearance to the AK-74. It uses a 6 round box magazine for easy loading. It has an excellent rate of fire and devastating stopping power."

Only available in multiplayer, the Saiga 20K Semi in Battlefield: Bad Company 2 is the second shotgun available to all kits requiring the achievement of rank 2. Like all other shotguns that are used with the Assault kit, the grenade launcher is replaced with C4. It has a default capacity of six shells, a good rate of fire and a short effective range. The Saiga 20K is most effective at extremely close range because its high fire rate and high damage enables it to kill multiple enemies quickly. For the quick trigger finger, the Saiga 20K is a good choice, since it is semi-automatic and is not limited by a pump-action function or an overwhelming automatic fire mode like other shotguns. It is statistically exactly the same as the USAS-12 (even though the stats bar in-game shows less damage for the USAS-12) the only difference being the fire mode is semi automatic contrasted to the USAS-12, which is fully automatic.

With the 12 Gauge Slugs specialization and Magnum Ammunition, it can be used as an effective semi-automatic rifle, though the M1 Garand may be preferred due to the extra two rounds per magazine or the M14 EBR due to the extra four rounds per magazine, however, with the Extended Shotgun Magazine specialization, the Saiga has a higher capacity of 12 rounds. However, with slugs, bullet drop must be accounted for. Another advantage the Saiga 20K has over these two weapons, besides its close range effectiveness and ability to mow down enemies in rapid succession, is that is can take down UAVs with ease. The use of a reticle rather than sights, though simply cosmetic, can be considered an advantage as well, due to the increase of peripheral vision.

The Saiga's in-game description and stats evaluation.
Add a photo to this gallery

The Saiga 20K Semi at Laguna Presa in Squad Rush.

The zoomed view of the Saiga 20K Semi. 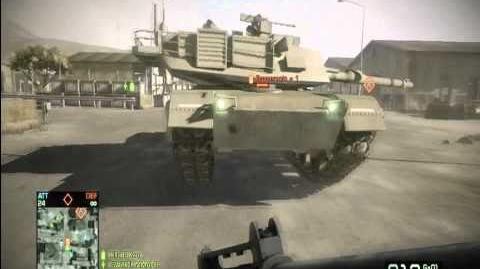 SAIGA 20K SEMI
Gameplay of the Saiga 20K at White Pass, Atacama Desert, and Isla Inocentes.
Add a photo to this gallery

Battlefield Play4Free game files
"A Russian made 20 gauge, gas operated, semiautomatic shotgun, similar in appearance to the AK-47. It uses a box magazine for easy loading and can be fitted with various optics. It has an excellent rate of fire and devastating stopping power."

The Saiga-12 appears as a purchasable weapon in Battlefield Play4Free. It remains semi-automatic and comes with a 14-round magazine, good damage, accuracy and moderate rate of fire, at the cost of 980

for unlimited use.The weapon has a very clean appearance, like all of the elite weapons, and sports a tan paint scheme on the magazine, pistol grip, and handguard. Although a good choice for close-quarters maps like Sharqi and even Karkand, the gun's effectiveness deteriorates with range; most players discard this gun for the USAS-12, which has slightly lower damage and a smaller magazine but costs fewer Battlefunds, can be temporarily bought with in-game credits, and has a higher rate of fire as it is fully automatic. 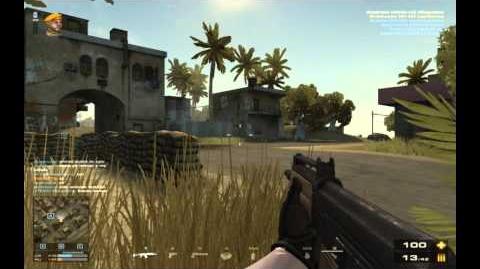 Symthic - retrieved September 8, 2012
"This Russian made magazine fed 12 gauge Shotgun is based on the proven AK-47 action and equipped with a folding stock. It is reliable, fast to reload, and capable of mounting a variety of accessories. The Saiga 12K is popular with Russian police and security services, and it is an effective close combat weapon with a wide pellet spread."

In Battlefield 3, the Saiga-12K returns in its 12 gauge variant - as signified by its name. The shotgun fires in semi-automatic mode and has a rate of fire of 220 rounds per minute, or 180 rounds per minute if firing 12 Gauge Frag rounds, and with moderate recoil. It has magazine size of 6 + 1 rounds or 10 + 1 with Extended Magazine. The Saiga-12K can unload a lot of damage in a short period of time.

In the singleplayer campaign of Battlefield 3, the Saiga 12K is first seen being used by the People's Liberation and Resistance in the mission Operation Swordbreaker when Misfit 1-3 moves into the building after the initial firefight. It is later found in the following mission Uprising without any attachments, where Black can make use of it in his fight for survival against the PLR as he moves through the ruins of Sulaymaniyah and it compliments the AKS-74u he receives early in the mission to help dominate at close ranges.

The Saiga 12K is then used by Dima with a PKA-S in the mission Kaffarov. He can use it to great extent later in the mission when the fight moves in to the villa, while his AEK-971 will help in the earlier sections of the level. Several enemies during the last two missions of the singleplayer campaign are also equipped with this weapon, and with attachments like the said PKA-S, the Laser Sight, an IRNV, and the Kobra.

In the multiplayer portion of Battlefield 3, the Saiga-12K is unlocked at Rank 34 and is an All-kit weapon. The weapon is very effective in close quarters situations like Operation Métro and Grand Bazaar in all game modes, or Rush on most maps due to the close quarters chaos around the M-COM Stations.

Because the Saiga-12K fires semi-automatically and has a large box magazine, it has a very high damage per second ratio as it can unload a lot of pellets in a shorter time than most other shotguns with its faster reload than the DAO-12 or M1014, the other two semi-automatic shotguns available in-game.

However, the Saiga-12K has a lower pellet count per shot than the M1014, with each shot of 12 Gauge Buckshot or Flechette Ammunition firing only 9 pellets, compared to the M1014's 10 pellets per shot. With either ammunition loaded, the Saiga-12K can kill in as few as one shot, or as many as 11 with Flechettes or 17 with Buckshot depending on how many pellets hit the target and at what range. At closer ranges, however, it generally takes one or two shots to bring a target down, with the potential to take multiple targets down with two or more shots.

The DAO-12 fires the same amount of pellets as the Saiga-12K, but starts with a larger magazine size at 8 shells that only gets larger with Extended Magazines at 12 shells, outpacing the Saiga-12K by one shell in each case at the cost of a longer reload. The M1014 on the contrary has a lower magazine at 4 + 1 by default or 6 + 1 with Extended Magazines, as well as a longer reload, giving reason for its additional pellet per shot. In addition, both the DAO-12 and the M1014 grants the ability of cancelling the reload process in case of emergency, while a Saiga-12K wielder is forced to either finish the reload or switch to a sidearm.

With 12 Gauge Slugs or 12 Gauge Frags, the Saiga-12K can be used at much further ranges as more of a high-power, semi-automatic rifle, at the cost of losing its edge in close quarters, requiring at least two shots to kill, while it can take up to 3 at longer ranges. Equipping a 3.4, 4x or 6x scope can help increase the effective range of the weapon on maps with larger sight lines, but players using these scopes will need to account for bullet drop against targets at long ranges. It's also worth noting that slugs have a very slow travel time and have a small effective range.

At close range, optics are of much less concern as the Saiga-12K with Buckshot or Flechettes generally does not need to be aimed, although it will be more accurate if the player chooses to do so. A Laser Sight can improve its hip-fire accuracy a decent amount as well, and before the 1.04 Patch that came with Close Quarters, it was more accurate to fire from the hip while stationary than to aim down the sights. A Flash Suppressor can help lower recoil for multiple shots at longer ranges with Slugs or Frags, or to decrease the ability of the player to be identified in close range in darker areas when firing due to the flash from the weapon when firing will be significantly reduced.

Extended Magazines is always a great option for close quarters as it nearly doubles the Saiga-12K's magazine and allows it to be able to fire more often and reload less often while still having the same ammunition count as without them applied. A Tactical Light can also help as close ranges to potentially blind targets, especially those with IRNV scopes, and to get the edge over them in close ranges if the player is assaulting a well defended area such as an objective in Rush.

The Saiga-12K on the map Operation Firestorm in multiplayer.

The Saiga-12K as it appears in Battlefield 3.

Left side of the Saiga-12K.

A close-up of the Saiga-12K's iron sights.
Add a photo to this gallery

The Saiga 12K is a shotgun featured in Battlefield 4.

The Saiga 12K is the standard shotgun of the RGF. It is equipped with a PKA-S, Flash Light and Modified Choke. It sports a Worm Autumn finish. It can be found off of one enemy just before the player heads down the elevator to blow up the dam in the Tashgar mission.

The Saiga 12K is the fourth all-kit shotgun unlocked after the Hawk 12G, and is the third semi-auto shotgun unlocked. It holds 8+1 rounds in the magazine and has a fire rate of 200 rounds per minute.

The Saiga has a larger magazine size than the other semi-automatic shotgun, the SPAS-12, and feeds from box magazine, giving it a faster reload. However, it fires slightly slower than the SPAS.

Equipped with a Full Choke and Kobra 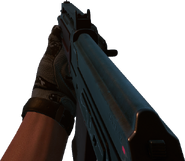 Retrieved from "https://battlefield.fandom.com/wiki/Saiga?oldid=362908"
Community content is available under CC-BY-SA unless otherwise noted.