Saint Chamond Assault Tank is a Codex Entry featured in Battlefield 1, introduced in the Battlefield 1: They Shall Not Pass expansion. It is unlocked upon obtaining 10 kills with the Saint-Chamond. 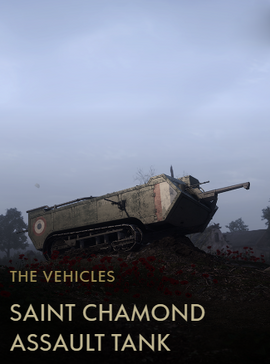 First built by French arms manufacturer FAMH in 1917, the "Char Saint-Chamond" was designed with the idea of improving on the Schneider CA1 tank. Manned by 8 men and outfitted with a full length 75mm gun at its front, its main purpose was originally to accompany the French infantry into attack. The front of the tank was protected by 11mm steel armor, the sides by 17mm, and each side also featured a Hotchkiss machine gun. Two gasoline-electric transmission engines powered each track separately, which was innovative for the time, making the Saint-Chamond much easier to steer than earlier tanks. Despite its weight of 23 tons it could reach a maximum speed of 12km/h over open ground. However, the first versions of the Saint-Chamond failed to be of military value and were very unpopular with the crews because of technical handicaps. the Holt-caterpillar tracks were too short for the tank's length and the overhanging nose with its big gun made it vulnerable to large shell holes and ditches. The engines were underpowered for the weight of the tank and that weight made the tank sink in on muddy ground. Later versions would improve the body armor, widen the tracks, and modify the front gun, but it was still unsuitable for its intended role. Instead they would be most often used as supply and recovery tanks, or as mobile batteries to combat German field guns near the end of the war.

Retrieved from "https://battlefield.fandom.com/wiki/Saint_Chamond_Assault_Tank_(Codex_Entry)?oldid=343296"
Community content is available under CC-BY-SA unless otherwise noted.