Sergeant Redford joined Bad Company at his own request so he could retire early, despite that the unit had a high mortality rate. It states in the games manual that he used to like the Army, but grew sick of it ever since he was sent to B-Company. At the beginning of the game, it was revealed that he only had 3 days left of service before he left. On his last day, after Haggard had 'single-handedly invaded a neutral country' to get mercenary gold, Redford threatens to court-martial and send Haggard to jail for the incident but ends up defending Haggard, saying that it was his plan to do it, causing him to serve a much longer service time in the US Army.

This resulted in him deciding to go AWOL in an attempt to steal the mercenary's gold. He, along with the squad, managed to successfully steal the gold. However, to their dismay, they found the US Army loading gold into their trucks. In a stroke of luck, a commanding officer sees Redford and his squad and asks them to take the truck full of 'scrap metal' which the squad worked out to be the gold that they previously discovered. The squad join the rear of the convoy, and then whilst no one is looking, they turn off onto a quiet road, where they excitedly begin to discuss how they will spend their loot with Redford stated that he intended to retire in luxury in a countryside with the golds.

After an unknown amount of time (and the disappearance of the gold), Redford and his squad are in Russia doing a recon mission with orders to save an unnamed agent from enemy hands. After witnessing the execution of the said agent by a high value target, Redford and the squad then proceed to escape from the village using a hijacked truck. Along the way, they are attacked by an enemy helicopter which Marlowe manages to shoot down. Redford then retrieves a case from the wreck of the truck containing an unknown weapon. After returning to base and giving the weapon to General Braidwood, the General tells them the weapon they found was a fake and that the Russians have been transporting a number of the fake weapons after the discovery of Operation: Aurora, where US Commandos invaded a small Japanese-held island to retrieve a Japanese scientist. The scientist had knowledge of secret weapon the Japanese were making in 1943-4.

Redford and the squad are then assigned to a Special Ops Unit in order to find out more about the weapon and the chance to finally go home, much to his dismay. While being flown into Bolivia by Flynn "Ghost Rider", who Haggard refers to as a "hippie", Redford admits that the past mission was supposed to be his final one before retirement. When they arrive, Redford and the squad head out to meet with a CIA agent named Aguire who is an expert with the weapon. Upon saving Aguire, Redford and the squad then embark on a journey throughout Bolivia and Chile, piecing together the history of the weapon and some of Aguire's past. After Marlowe stumbles upon a journal containing information about the Operation and the actual weapon in an abandoned freighter, Redford heads out to meet up with Aguire. Along the way, their helicopter is shot down and the squad is separated.

Redford meets up with Haggard and later, Marlowe and Sweetwater, and then set out to save Flynn, who was captured at the crash site. After a close escape, the squad meets up with Aguire who then betrays them due to the fact that his father, Thomas Wyatt (whom the player plays in the first mission), was killed in Operation Aurora. The operation turned out to be a ruse by the US military to see what the Japanese weapon would do. Aguire then admits when Marlowe told him about the Journal, he defected to the Russians who are now going to use the weapon to destroy America's power grid and leaving the US in an anarchic state, leaving the Russians free to invade.

Redford and the squad are saved from an execution by Flynn who dies in the process. After much debating, Redford goes along with Marlowe's plan to either retrieve or destroy the weapon. While fighting in the slums of a city, Redford witnesses the weapon being used, causing a giant EMP with the radius of an atomic bomb. After witnessing this Haggard and Sweetwater decide to give up but Marlowe and Redford manage to convince them to finish the fight. The squad then board the plane which the bomb is being transported to America, ditching their weapons along the way.

After almost an entire day later, Redford and Marlowe kill two guards and cause havoc on the plane. They discover the weapon is stored in a room which Sweetwater describes as "taking a act of God or a whole lot of C4 to break into". After going to the cockpit, Redford then decides to blow the weapon up along with the plane, saying "Retirement is going to be boring anyways." After jumping from the plane, the squad lands near Haggard's hometown in Texas. Just as they are about to celebrate, the General then arrives to tell them the Russians have invaded Alaska, further postponing Redford's retirement. 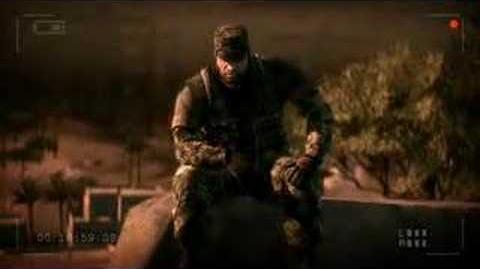 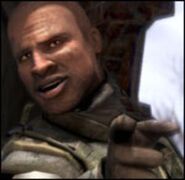 Sergeant Redford in an early build of Battlefield: Bad Company.

Sergeant Redford in Battlefield: Bad Company 2.
Add a photo to this gallery

Retrieved from "https://battlefield.fandom.com/wiki/Samuel_Redford?oldid=371403"
Community content is available under CC-BY-SA unless otherwise noted.