Santiago "Dozer" Espinoza is a specialist featured in Battlefield 2042.

Born in Mexico, Dozer came to the US at a young age as an undocumented immigrant and chose to join the US Army as his pathway to citizenship. Sadly, waves of mass refugee immigration led to the military reversing their position and Santiago's deportation from the country he'd risked his life to defend.

Dozer didn't let this setback blunt his ambitions; he started a family and a successful business as a gunsmith before losing his home in Jalisco to brutal storms. Forced to leave once more, he and his family headed for Puerto Rico, where he uses his experience and strength as an Assault Specialist to aid Non-Patriated causes.[1]

"Use this shield as a battering ram, protection from incoming fire, and for closing the gap on enemies."

Espinoza's specialty is the SOB-8 Ballistic Shield. Unlike its counterpart in past installments, the SOB-8 is capable of reflecting damage back upon an aggressor.

When stowed, it seems to function in a similar manner to its Battlefield 4 iteration, disappearing into the player's kit rather than being visibly carried at all times.

The shield itself is impenetrable to all types of damage. The player's feet remain vulnerable from the front unless the player crouches. Performing a bash attack will deal 50 damage on a successful hit, but may expose the player to incoming fire.

Dozer's movement speed are slowed, allowing enemy players to flank and deal damage to him. The shield also limits Dozer's turn speed and ability to look down.

Espinoza comes with Blast Resistant as his trait.

"With a life story full of border crossings, violent uprisings, and gunfire, Santiago "Dozer" knew what it meant to be a No-Pat before the word existed. It's that perspective that gives him the empathy to lead the non-patriated now."[4] 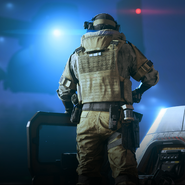 Kill or Be Killed Player Card