When activated, after a short delay it sweeps across the commander map revealing red dots where enemies are currently located (note that this is not UAV-style tracking, but a one-time 'spot'). Although this information is not given to teammates, the commander can then 'spot' the enemies for his team, or use the locations to decide where to deploy other resources such as artillery.

Satellite Scan in Battlefield 2142 functions identically to its appearance in BF2. 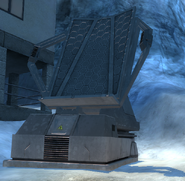 The Satellite Scan dish in Battlefield 2142.

Satellite Surveillance is a gadget featured in Battlefield Play4Free and is unlocked as a tier 3 Training option for all kits. Once activated, it reveals the location of all enemy players for a short period of time.

In Battlefield 4, the Commander role returns, with the previous games' Satellite Scan split into two separate functions: Infantry Scan and Vehicle Scan. The two resources are intended to address continuous callouts of enemies by BF2-era commanders.[1] Both are "main asset loop" resources that must be acquired by holding specific capture points.

Both abilities were first seen in the "Battlefield 4: Official Commander Mode Trailer".

Scanning for enemy foot-mobile infantry. This scan wipes laterally across the battlefield from left to right.

A separate scan for enemy vehicles, running from bottom to top.