The Steyr Scout Tactical Elite is a bolt-action sniper rifle made by Steyr Mannlicher in Austria and is the successor to the Steyr Scout. Unlike its predecessor, the Scout, the Scout Elite has some notable differences, such as an extended Picatinny type mounting rail, an enlarged bolt knob, an adjustable cheek piece, and a height-adjustable butt pad. It is also fitted with a heavy barrel and can produce high muzzle velocities due to a "fast" internal profile.

The Scout Elite is a bolt-action sniper rifle available to the Recon kit in Battlefield 4.

It is unlocked by completing the Gold assignment on Shanghai. It is equipped with a CL6X, Variable Zoom, Flash Hider and Straight Pull Bolt. It sports a Worm Urban camouflage.

It unlocks American attachments normally, and must unlock Russian and Chinese attachments through Battlepacks. Compared to other Sniper Rifles, it does less damage at range, requiring up to three shots to kill (or one headshot), at the benefit of greater mobility and the highest rate of fire out of all bolt-action Sniper Rifles. It features high velocity, only behind the M98B. Despite having such a high velocity, it, along with the SV-98 has the fastest bullet drop. Due to this, the Scout Elite is forced into an agressive Recon playstyle, as preforming long range kills proves to be difficult. Suppressors work very well on the Scout Elite, as the bullet drop is already so high that the added drop is barley noticable at closer ranges. Low power optics or even red dot sights also work well on the Scout Elite due to this. 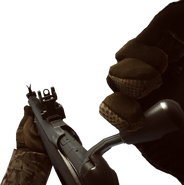 0.25
0 ┴ 0
"The Scout Elite is a modern bolt-action rifle intended for law enforcement in an urban tactical role. This rifle is fast to the work the bolt on , meaning you can chamber the round quickly."

The Scout Elite is a sniper rifle featured in Battlefield Hardline. It was first seen during the Rescue trailer.

The Scout Elite is found in Gator Bait on a high platform, which may be reached via zipline. It does not feature a scope, however, only being equipped with iron sights and a 15-round magazine.

The Scout Elite is the starting weapon for the Professional kit, and comes equipped with a TA 648, Flash Hider, and Straight Pull by default. Although it does low damage, it has a faster bolt-action than the other rifles, making it well suited for close-ranges and performing quick follow-up shots at longer ones. In addition, it has a very tight hipfire spread, which makes unaimed fire a reliable option in close quarters.

The Scout Elite in the Rescue trailer.

A Law Enforcement Professional with a Scout Elite next to a Mechanic with an MP5K.
Add a photo to this gallery

Retrieved from "https://battlefield.fandom.com/wiki/Scout_Elite?oldid=367824"
Community content is available under CC-BY-SA unless otherwise noted.