"Don't ever stop fighting until the fighting is good and done."

Seamus Byrne is an Elite available in Battlefield V for the Allied Power in The Company. He was released alongside Ernst Schubert on April 30, 2019 as a part of Tides of War Chapter 3, Trial By Fire. He can be purchased for 990

As with other Elites, Seamus features a unique best squad animation and an exclusive melee weapon: the Lever Pipe. It is unlocked upon completion of Seamus' Special Assignment.

Special operations veteran. Rumors suggest he volunteered or was conscripted to the King's Guard - he's not telling. Strong and anything but silent, Seamus lives to push a hard-fought frontline with a well-timed put-down. Extensive urban combat experience. Hits, runs and hits again.

Comfortable with explosives at danger-close proximity, even if his squad isn't. Sometimes acts before thinking through all consequences, leaving both himself and his squad dangerously over-extended.

In The Company Menu 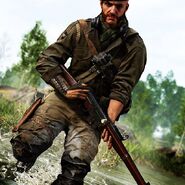 Retrieved from "https://battlefield.fandom.com/wiki/Seamus_Byrne?oldid=374326"
Community content is available under CC-BY-SA unless otherwise noted.