Sedd El Bahr is a Codex Entry featured in Battlefield 1. It is unlocked by killing ten enemies with melee attacks in the chapter Be Safe in the singleplayer mission The Runner. 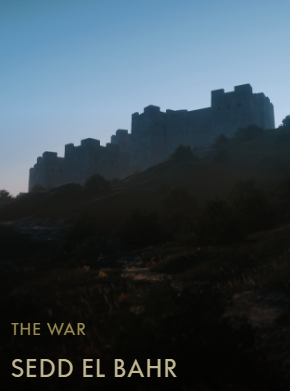 Gallipoli is known for its vertical and rugged terrain that made fighting difficult. But the peninsula is vast and features many types of areas: villages as well as fortresses both ancient and modern.

Before the fighting ground to a halt, the infantry saw action in the village of Sedd el Bahr close to the ancient fortress. This old castle-like fortress was surrounded by defenses and more modern fortress around the peninsula, making the massive allied fleet cautious of where ground troops could be deployed.

Stories tell about the Irish troops from the Dublin and Munster Fusiliers who in those first hours of the Gallipoli campaign were ordered to assault the castle and the village of Sedd el Bahr. After 24 hours of house-to-house fighting these heroic troops had made themselves masters of the village.

Retrieved from "https://battlefield.fandom.com/wiki/Sedd_El_Bahr_(Codex_Entry)?oldid=343421"
Community content is available under CC-BY-SA unless otherwise noted.