Not to be confused with the Selbstlader M1916

The Luger Selbstlader Model 06 was a German semi-automatic rifle designed by Georg Luger, and patented in England in 1906. The self-loader was heavily based on Luger's iconic pistol design, with its toggle-lock firing mechanism being copied and subsequently scaled up to use the full-sized 7.92x57mm rifle round. The weapon received some modifications over the Luger pistol to improve reliability in muddy conditions, but ultimately did not enter mass production. Only a few prototypes were believed to be manufactured, with at least one surviving to this day.[1]

This item has a Codex entry: Selbstlader 1906

"A German self-loading rifle prototype based off of an improved version of the P08's toggle lock mechanism."

The Selbstlader 1906 is a self-loading rifle featured in Battlefield 1 for the Medic kit. It is unlocked for purchase upon attaining Medic Rank 10.

"Despite being a basic rifle pattern, this weapon offers high aimed accuracy."

The Selbstlader 1906 Factory can kill in three shots at any range, similarly to the Mondragón and the Selbstlader M1916, and it possesses one of the highest rates of fire out of the Medic guns. However, it only has a five-round magazine. This means that the Selbstlader 1906 is effectively relegated to success in one-versus-one encounters without counting headshots, as a reload is practically necessary after every kill, and reloads can be long if rounds remain in the gun.

In one-versus-one encounters, precision is necessary as there is a minimal margin for error with its small magazine, which this gun thankfully aids due to its characteristics. Its high rate of fire offsets this somewhat, allowing the player to land three shots in quick succession, but not by much; the Selbstlader 1906 is most effective for a player with a skilled aim.

The Selbstlader 1906 Sniper variant is a weapon variant introduced in the Spring 2017 Patch. It is unlocked by obtaining 300 kills with the Factory variant and performing 25 kills with Rifle Grenades. This variant features a high-power scope, and a Bipod.

Due to the Selbstlader 1906's extremely tight spread and high rate of fire, the bipod and scope can make it competitive with Scout weapons at long ranges.

Selbstlader 1906 as seen in the customize menu

2.0
0.0 ┴ 0.0
"The same toggle-lock mechanism used on the German
P 08 pistol was also used for a semi-automatic rifle. The design was a success but only a few prototypes were ever built."

The Selbstlader 1906 is a weapon featured in Battlefield V. It was introduced in the first Tides of War expansion, Overture and was unlocked upon completion of the third week challenges. It is currently purchasable via The Company for 1,700

The 1906 is statistically similar to the ZH-29, killing in two shots at any range but limited by somewhat high recoil and a slow rate of fire at 164 RPM (only one RPM faster than a ZH-29 upgraded with Trigger Job). The main difference between their specialization trees is that the 1906 offers Lightened Stock, allowing the user to move faster while aiming down the sights. In exchange it cannot be upgraded with a Detachable Magazine, giving it a slower reload (which can be partially alleviated with Quick Reload) and no way of upgrading the five round capacity. Another severe drawback of the 1906 is that the weapon's reserve carrying capacity is substantially lower than all other SLRs - at 20+5 rounds, this is less than half of what can be carried by the ZH-29. Users may therefore find themselves in need of resupply more frequently.

The Selbstlader 1906's main advantage over other SLRs is that it can be customized with a rare 2x scope, also found on the Ag m/42 and Trench Carbine. It is the only scope available to the Recon class which simultaneously has no lens flare and allows for charger loading.

The weapon's range of Specializations grant general increases to weapon responsiveness. The Rank 1 choice of Bipod can help mediate recoil, which is the highest in its class, as can Recoil Buffer which reduces it to 1.6. Quick Reload can also be beneficial considering the limitations placed on reloading. 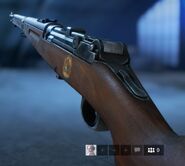