Not to be confused with the Selbstlader 1906 (Codex Entry) 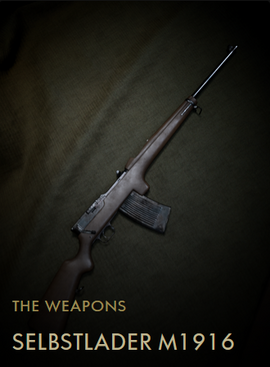 At the start of WW1, the German army was doing tests of self-loading rifles. The Selbstlader M1916 was rejected by the army, and was instead adopted by various branches of the German air force in 1915 for use in aircraft, observation balloons and airships. The main problem with the Selbstlader M1916 was sensitivity to dirt, which barred it from being fielded as a ground weapon. It used a delayed blowback mechanism and was fed from a 25-round detachable magazine.

The Selbstlader M1916 was also expensive to produce and was later replaced by the much cheaper Mondragon rifle, even though it had even bigger reliability issues. Eventually, self-loading rifles became obsolete in the air force as aircraft-mounted machine guns gradually replaced them.

Retrieved from "https://battlefield.fandom.com/wiki/Selbstlader_M1916_(Codex_Entry)?oldid=343125"
Community content is available under CC-BY-SA unless otherwise noted.