"How much would you do for your country?"

Semper Fidelis is the first mission in the singleplayer campaign of Battlefield 3.

The player, as Henry Blackburn, starts out in the middle of a New York City street overlooking a subway system. After hearing some police sirens, Blackburn dives onto the train, and barely manages to grab onto one of the car edges as he slides off the top.

He swings in, landing upon and subsequently killing several PLR operatives with an M9. After doing so, Solomon can be heard in the background telling his operatives to kill the passengers on the train, explaining that "none of them are innocent." Meanwhile, Blackburn advances through the train. He unlocks a door that had been jammed via an M1014. However, upon reaching the first corner, he is ambushed by a PLR operative with an AKS-74u. After a brief melee, Blackburn manages to take the enemy weapon and force the operative out onto the tracks, although losing the M1014 in the process.

Blackburn then encounters Solomon behind an unbreakable window. He primes a set of explosive charges, and then walks away, whereupon Blackburn climbs out of the train and jumps from one car to the next, narrowly escaping the subsequent explosion. Solomon fires at Blackburn who stumbles and nearly falls onto the train tracks. However, he recovers, and manages to climb onto the top of the train. As he slowly advances, he is attacked by several operatives. Another explosion occurs on the car in front of Blackburn, allowing the marine to re-enter the train.

After killing several more PLR operatives, Blackburn reaches a car that seems empty apart from a single operative, who raises his hands in surrender. Solomon ambushes him, and demands to know if Blackburn is on his own. The level ends at this point and the mission Operation Swordbreaker follows, but the events of this level are re-enacted during the final mission, The Great Destroyer. 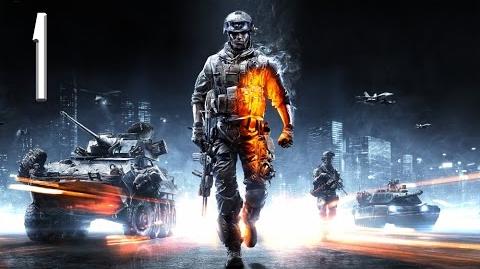 Semper Fidelis loading screen.
Add a photo to this gallery

Retrieved from "https://battlefield.fandom.com/wiki/Semper_Fidelis?oldid=378174"
Community content is available under CC-BY-SA unless otherwise noted.