Sharqi Peninsula is a map featured in many installments of the Battlefield Series.

Sharqi Peninsula is a map featured in Battlefield 2.

"This vital position on the Persian Gulf possesses a TV station with a powerful transmitter, allowing it to aid propaganda support for the ongoing MEC campaign. US Rapid Deployment forces have captured this coastal position and now face a determined counterattack by converging MEC forces. This lazy seaside resort of villas, markets and beach houses is about to become a modern battlefield as US forces attempt to hold on to their newly-captured communications prize." 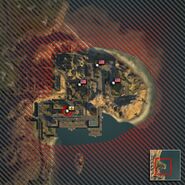 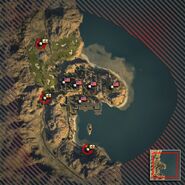 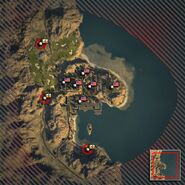 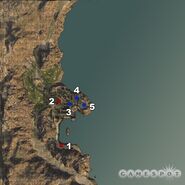 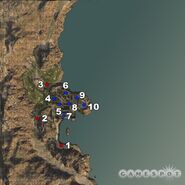 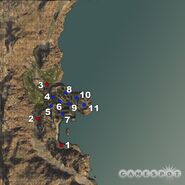 Alpha screenshot of Sharqi Peninsula 64 players.
Add a photo to this gallery 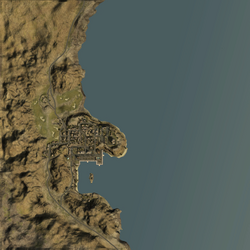 Sharqi is a map featured in Battlefield Play4Free. It is based on the 16-players variant from Battlefield 2, but has three control points and two uncapturable bases - one for each team, rather than three control points and one uncapturable base. The two factions differ only in that the United States Marine Corps fights the Russian Army rather than the Middle Eastern Coalition.

"Both sides have sent in their elite urban forces to fight building to building to take control of these close quarters. The war has turned personal in the streets of Sharqi."

This is the first flag captured by the Russian Army; it is covered on the west side by a wall, but on other sides there is almost no cover, making the use of smoke grenades advisable.

The central flag is the most important strategic point on the map and securing it at the start of a match can help split the map in two, spawn trapping the enemies at their own flag. From the courtyard one can quickly reach both the A and C flag following one of the several flanking routes and snipers also have great lines of sight on the main areas of the map.

This is the closer flag to the US spawn. It is characterized by close quarters with several alleys but also long lines of sight over the central street and the B flag. This flag is usually captured by standing behind the dumpsters on its sides to reduce enemy's visual.

Sharqi has now been enlarged and previously inaccessible areas such as the construction site and TV station can now be accessed and both areas house 2 M-COMs. The Russian Ground Forces are the attackers, while the United States Marine Corps are the defenders. The attackers have 100 tickets.

There are a total of five bases. Each base except for the Attackers deployment houses 2 M-COMs.

The attackers deployment is situated behind the town. The attackers must make their way to the 2 M-COMs that are located in the alley where Flag A used to be.

Once the attackers make it through the town, they must attack the courtyard where flag B is located. M-COM A is located behind the building where the downed UH-60 Black Hawk is located. This M-COM is relatively easy for the attackers to get to because it is surprisingly located just a few meters away from the wall. M-COM B is located in a bunch of sandbags near a radio tower.

The next site of the M-COMs is the Construction site. Previously inaccessible in the conquest game mode, it, along with the TV station, house the two remaining sets of M-COMs. M-COM A is located at the building that is closer to the crane, while M-COM B is located near the site of Flag C. The buildings can provide the defenders with cover as well as the advantage of having a clear line of sight because they are on the buildings. 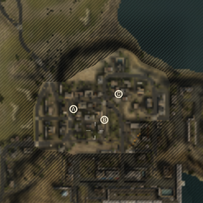 Sharqi as seen on Play4Free 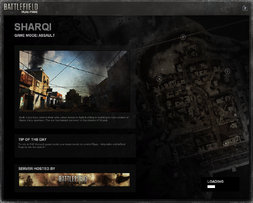 The P4F Sharqi loading screen from the game client 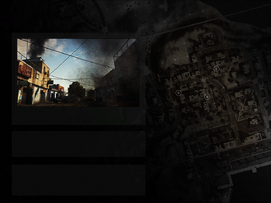 The P4F Sharqi loading screen from the game files 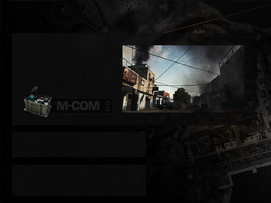 The P4F Sharqi Rush loading screen from the game files.
Add a photo to this gallery

Sharqi Peninsula is a map featured in the Battlefield 3: Back to Karkand expansion.

The PC version of Sharqi can range up to seven flags while the console version has up to five.

The US starts off controlling all flags, due to the map being only available in Conquest Assault.

The RU Deployment is at the old Beach House flag. It features a small bay, which has RHIB boats that can be used to quickly access the Hotel or TV Station. The BTR-90 IFV and T-90 tank are available here. A Mi-28 Havoc spawns on a helipad at the deployment.

The City Entrance is the most westward flag. It is usually one of the first flags to be captured by the RU, because of its proximity to the RU Deployment.  The Entrance contains 2 levels, a lower level and an upper level, connected by 3 roads. In the center, there is a 4-way intersection.

The Hotel is positioned just south of the Construction Site. Its layout it similar to all hotels featured in Back to Karkand, with an empty pool, a lobby at the bottom of the building, and a ladder up to the top.

Due to its centrality in the map, it is a strategically sound point to capture. The buildings offer good vantage with decent cover to overlook many of the other points. The crane is also a good reason to hold this point, as any recon who can safely scale it has a clear line of sight to nearly every point on the map.

From the top, a SOFLAM can be planted which can distract tanks and choppers long enough for ground engineers to be effective. If sniping, be aware that the crane is also a target for annoyed choppers and Recons, so it is crucial to either plant a beacon or escape.

The Alleyway is positioned to the north of both the City Entrance and the Surveillance Point. It is generally a secondary flag, normally captured only by attackers that hope to flank both the Parking Lot and TV Station.

This secondary flag is often captured by the attackers to support a further attack at the often heavily guarded TV Station, due to its proximity and covered pathway to the TV Station.

The roof of the TV station is an ideal spot for snipers but is a dangerous place to be because of enemy snipers on the crane. A helicopter spawns for the defenders on the roof. There are several entrances to reach the flag; the main, side and back. If the attackers are quick enough in spawning onto the RHIB boat, they can quickly rush up towards the roof which will provide a stable spawn point.

It is valuable to note in conquest, that if RU (the outer bases) control point G (TV Station) the US will not only have no access to a helicopter, but the RU will have access to two helicopters.

Retrieved from "https://battlefield.fandom.com/wiki/Sharqi_Peninsula?oldid=358334"
Community content is available under CC-BY-SA unless otherwise noted.