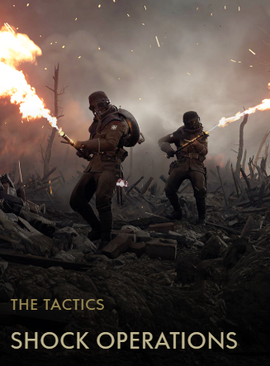 The late stages of the war saw defensive grids organized in depth, and leaders relying on rapid counter-attacks by heavily armed assault troops that could be send out at a moment's notice. As reports came in that the enemy was held up on the battlefield by fortified strongpoints, those combat-proven reserves would quickly ready weapons and ammunition and prepare to be sent in at the perfect time. Far from their Generals, lower officers led their men by gut instinct and with their own tactical initiative. After rapidly traversing the trenches, they would crash into the flanks of the attacker, trying to break them from their lines. It was a return to the infantry battles of yesteryear, often over open ground and through the shell craters of the bombed out battle zones, where sudden engagements for control of the battlefield raged back and forth.

Retrieved from "https://battlefield.fandom.com/wiki/Shock_Operations_(Codex_Entry)?oldid=343363"
Community content is available under CC-BY-SA unless otherwise noted.