Shock Troopers is a Codex Entry featured in Battlefield 1. It is unlocked for playing as the Assault kit for thirty minutes. 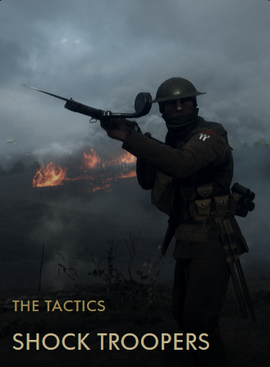 By 1916, trench-raiding squads emerged on all sides, but the German High Command began to experiment with specialized assault teams on a larger scale. The Rohr Battalion was the first to combine light infantry and pioneer groups to break through the enemy's defenses in a swift and concentrated attack and to create a gap for the regular infantry, but the real birthplace of the shock troops was the Russian summer offensive of 1916. It was Russian General Alexei Brusilov who timed concentrated artillery barrages with aggressive infantry attacks to break the Austrian lines.

Soon the Germans created what they called Sturmtruppen, or Stormtroops. Highly motivated, extremely aggressive, and expertly trained in all kinds of weapons, they carried grenades, flamethrowers, and submachine guns, overwhelming defenders through shock and brutality.

Retrieved from "https://battlefield.fandom.com/wiki/Shock_Troopers_(Codex_Entry)?oldid=343330"
Community content is available under CC-BY-SA unless otherwise noted.