The Serbu Super Shorty is a compact, stockless, pump-action shotgun chambered in 12-gauge. Most production models are based on the Mossberg Maverick 88 shotgun, though some are made from the Mossberg 500 and Remington 870 as well. It features a spring-loaded, folding foregrip.

The Shorty 12G is a sidearm featured in Battlefield 4 and is the fourth unlockable sidearm. It and Mare's Leg are the only sidearms not classified as a handgun. It has the fastest rate of fire of all pump-action shotguns, but is balanced by its small ammo capacity, low pellet count, and inability to use different ammo types.

It has a small capacity at 3 rounds, one in the chamber and two in the magazine, at the advantage of high close-range power, potentially killing an enemy in one hit. It shares unlockable sights with handguns such as the Ghost Ring Sight, Mini (RDS), and Delta (RDS). It can also equip various laser sights and flashlights. As of the Spring Patch it has a built-in Ergo/Vertical grip modifier.

Much like other shotguns, it can equip choke attachments, such as the Duckbill, Modified Choke, and Full Choke. However, it is restricted to Buckshot and cannot use any other ammo types. Uniquely, both the Modified and Full chokes are unlocked by default.

Since it lacks any iron sights, the Shorty 12G cannot be aimed unless a sight is equipped, restricting the player to hipfire. Shorty 12G kills count towards shotguns, not handguns, and level up Shotgun progression. 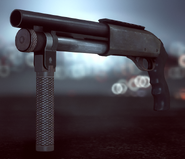 Loading a shell into the chamber during an empty reload

The Shorty 12G used by Recker during the "Fishing in Baku" trailer. In the final game the weapon is not available during singleplayer.

The Shorty 12G on Paracel Storm