A shovel allows its user to dig into soil. During the Vietnam War, North Vietnamese forces made extensive use of hand-dug tunnels allowing them to discreetly travel and transport materiel, safe from detection or attack by air.

During World War I, soldiers were known to use their shovels as melee weapons, and even sharpened their edges to be better at fighting.

A specific kind of folding shovel used by military forces is the "entrenching tool".

The Shovel is gadget featured in Battlefield Vietnam, used by the Engineer kit. It is used to create a mobile spawn point for the North Vietnamese Army.

Unlike other gadgets that are equipped on the player, the shovel spawns at the base, and must be carried by an Engineer to the desired location. It is usually found near a manhole (leading into the tunnel that is implied to be created by the player).

It can be picked up with the Pick up kit key (default "G"). Once the player is ready to use the shovel (the opposing team's flag, for instance) the player then selects it and presses the Fire button. Once placed, the shovel acts as a spawn point for the player's team.

The spawn point created by the shovel can be destroyed by enemies using explosives. 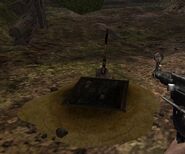 Shovel mobile spawn point
Add a photo to this gallery

Dirk's Digger is a melee weapon featured in Battlefield Heroes for the National Army Commando class. Statistically identical to the Knuckleduster Dagger, it functions in the same manner as other knives.

The Shovel is a blunt weapon introduced in the Battlefield Hardline: Betrayal expansion. Functioning in a similar manner to the Fire Axe, it has a long swing time and is a one-hit kill when obtaining a successful strike against an enemy.

The Gold Shovel is unlocked upon completion of the Gravedigger Syndicate assignment.

40
"The small size of shovels made them suitable for melee combat in the trenches. One edge was often sharpened to make them able to cut into the enemy."

The Shovel is a melee weapon featured in Battlefield 1.

As a weapon, it performs similarly to other hand tools, delivering 80 damage to the front, and 100 damage to other angles. Kills with the shovel will also award the victim's dog tag.

The shovel is incapable of breaking wire, wood, or damaging light armor.

A German medic holds his Shovel after killing a British soldier with it.

A British soldier preparing to swing his Shovel.
Add a photo to this gallery

The Shovel is one of several tools included in the Toolbox in Battlefield V. It is used when constructing earthworks such as digging foxholes, or piling up barricades of dirt or snow.

Retrieved from "https://battlefield.fandom.com/wiki/Shovel?oldid=365633"
Community content is available under CC-BY-SA unless otherwise noted.