PC
"By the end of 2142, freezing temperatures, mass migration and warfare had rendered most of the PAC occupied territories uninhabitable. Desperate to sustain its dwindling population, the PAC changed its military focus to capturing key energy, food and water supplies. Shuhia Taiba, a large-scale, EU agricultural project located in northern Egypt, was one of the PACs primary targets. On November 11th, a fleet of Titans carrying six PAC Command Divisions flew into the skies above Shuhia Taiba. They were immediately greeted by the EUs 2nd Army. The resulting battle raged for more than a year. When the EU and PAC clashed at Shihua Taiba, both sides utilized more than twenty Titans between them. By the end of fighting a year later, only two remained. Continuous assaults rendered half of the capabilities useless by the first month. Years later, covered in metal carnage, Shihua Taiba would be referred to as the Titan Graveyard"

Shuhia Taiba is a map featured in Battlefield 2142.

The EU's starting base resides along the west end of the map. Here, the Commander Assets, two MK-15 Bandits, a L5 Riesig, an AMV-2 Groundhog, and an A-8 Tiger spawn. A Rorsch Mk-S8 spawn near the entrance to defend against any PAC vehicles that try to attack this uncapturable base.

The Freezer control point lies on the southern part of the mountain pass, and will spawn two Rorsch Mk-S8's and an FAV once captured. There are several buildings and silos nearby that can be used by snipers of both defenders and attackers to thin out the other side's ranks

Residing at the center of the map, the Central Base control point is overshadowed by a large building west of the flag. The control point will spawn two Rorsch Mk-S8's when captured. It is common to see squads camping on top of the building- normally using a Squad Leader Spawn Beacon to respawn on top of the building if they are killed- who will shoot down onto any enemies who try to capture the point.

Located on the north edge of the pass, the Office control point is located in the parking lot of an office building. An FAV and two Rorsch Mk-S8's will spawn once it is captured. As with the Freezer control point, it can be advantageous to use the walkways on the silos to get around the control point while avoiding being spotted.

The uncapturable base for the PAC lies on the eastern end of the map. Here, similarly to the EU base, a BTR-4 Romanov, a T-39 Bogatyr, a Type 32 Nekomata, two UAZ-8 Ocelot's and the team's Commander Assets spawn here. Unlike the West Mountain Pass, however, no turrets spawn here, making any EU intrusions harder to repel. 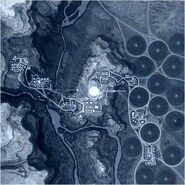