The Sickle is a Codex Entry featured in Battlefield 1. It is unlocked upon obtaining 10 kills with the Sickle. 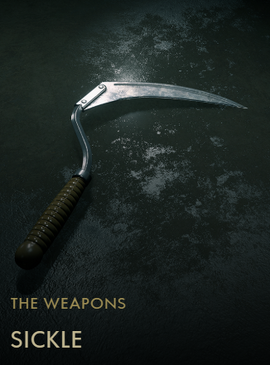 "What are you gonna do? Cut me down with a sickle?" - Unknown Soldier cut down by a sickle.

Fighting in the vast countryside of Eastern Europe was not confined to the battlefields, but also took place during retreats and civil unrest, forcing soldiers and civilians alike to defend themselves with whatever weapons and tools they had at hand. The sharp edge of a farming tool could be as effective as a combat blade if the situation demanded it, and sickles, scythes, and even shovels were pressed into emergency service as combat weapons.

Retrieved from "https://battlefield.fandom.com/wiki/Sickle_(Codex_Entry)?oldid=343118"
Community content is available under CC-BY-SA unless otherwise noted.