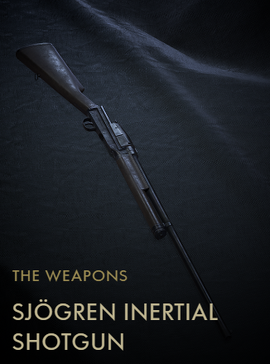 The Sjögren Inertia Shotgun is a 12 gauge semi-automatic shotgun designed by Swedish inventor Carl Axel Theodor Sjögren in 1900, making it one of the very first automatic shotguns ever - only just beaten by the American A5 desgined in 1899. Sjögren's shotgun used a novel inertia-based operating mechanism, an approach which was later revived by an Italian shotgun manufacturer and is widely used in semi-automatic shotguns today. Sjögren also designed a military rifle based on the same inertia mechanism, but it was never adopted and only ever manufactured in very few copies.

Shooting the Sjögren shotgun can feel unpleasant, as the large bolt assembly is visible and slides back against the shooters face when recoiling. The energy absorbed by this cycling action was supposed to lighten the weapons recoil, and the mechanism may look simple, but how it actually functions is very difficult to understand.

The Sjögren shotgun was initially built in Sweden, but the manufacturing was moved to Denmark in 1905, where 5,000 of the weapons were built until 1909 when production ended. The Sjögren shotgun saw some commercial sales, and it was used in very limited numbers by both Allied and Central Power forces during WW1. Some were taken as war trophies during the world wars and can still be found. It is even said that a few people use Sjögren shotguns for hunting to this day.

Retrieved from "https://battlefield.fandom.com/wiki/Sj%C3%B6gren_Inertial_Shotgun_(Codex_Entry)?oldid=343200"
Community content is available under CC-BY-SA unless otherwise noted.