• Obstructs vision and provides light concealment.
"The J4-M35 Smoke Grenade has helped many soldiers out of dire situations. Simply throw the grenade wait for the smoke to spread and change firing positions when the enemy can’t see you."

The Smoke Grenade is available to the Assault kit in Battlefield 2, functioning as the class' special ability alongside the grenade launchers used by the kit. It is thrown like a frag grenade (default Left-Mouse-Button for normal throw, default Right-Mouse-Button for a controlled distance throw), but releases a cloud of grey smoke a few seconds after landing instead of exploding. The smoke cloud obstructs vision through it but it does not last very long, staying active for about five seconds. This makes it less useful as concealment to hide in, and works best when used to block hostile lines of sight to move safely. The Assault only receives one Smoke Grenade, so unless a friendly Support or a Commander's Supply Crate is nearby, it should be used wisely.

In the Special Forces expansion, Smoke Grenades are replaced by Flashbangs. Likewise, Flashbangs will also be used if the player equips the F2000 in the base game.

Orders issued by squad leaders or the Commander also place a colored smoke grenade on the map that can only be seen by the squad. It will disappear when the player arrives at the objective or the order is completed. The smoke comes in three colors: yellow for movement orders, orange for attack orders, and purple for defense orders.

The Smoke Grenade in Battlefield 2

Promotional image of the smoke grenade 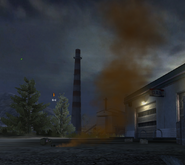 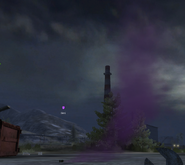 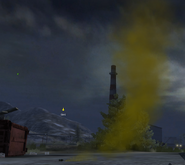 Smoke marker for movement orders
Add a photo to this gallery
Retrieved from "https://battlefield.fandom.com/wiki/Smoke_Grenade/Battlefield_2?oldid=363873"
Community content is available under CC-BY-SA unless otherwise noted.