For other uses, see Sniper.

Sniper is a Codex Entry featured in Battlefield 1. It is unlocked for playing as the Scout kit for thirty minutes. 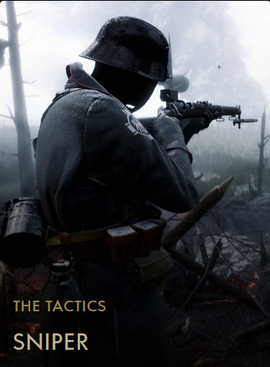 At the beginning of the war, the best marksmen of a company were usually used as snipers, and their task was to constantly harass the enemy by shooting at everything that popped up over the trenches. Later in the war, snipers were professionally trained in marksman academies, and their rifles were outfitted with telescopic sights.

Snipers were the patient observers of the battlefield, always on the lookout for enemy movement and activity. Camouflaged by foliage and hoods, they often lay for hours - if not days - in no man's land or in well-protected positions in their trenches. They carried a gauge for measuring wind velocity and even checked the moisture content of the air, which could affect a bullet's trajectory. It was the snipers who kept everyone on guard at all times.

Retrieved from "https://battlefield.fandom.com/wiki/Sniper_(Codex_Entry)?oldid=343334"
Community content is available under CC-BY-SA unless otherwise noted.