For other uses, see Sniper.

The Sniper in Battlefield 2 specializes in eliminating enemy infantry and key targets at long ranges. The class is armed with a bolt-action sniper rifle or Designated Marksman Rifle with a high power scope as their primary weapon and a suppressed, faction specific pistol to use in close-quarters. The class wears a ghillie suit, allowing him to stay hidden in foliage and become harder to spot at a distance.

The Sniper also carries two Claymore anti-personnel mines which can be used to protect the Sniper's position or set up as traps for enemy troops. The kit boasts a fast movement speed, but is not armored, so the Sniper must be careful when engaging enemy infantry up close and can make use of his speed to evade hostiles.

In Battlefield 2: Special Forces, the Sniper is also equipped with a Zip Line Crossbow, allowing them to move quickly from a high point to a low point. The class also no longer wears a ghillie suit, so use of the increased mobility offered by the Zip Line is a must in order for the Sniper to remain undetected. 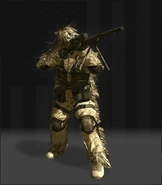 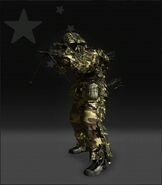 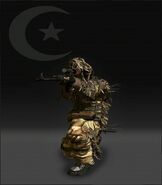 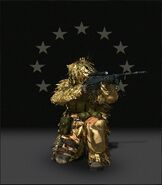 The EU Sniper.
Add a photo to this gallery 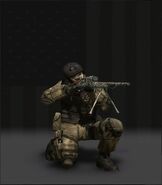 The US Navy SEAL Sniper. 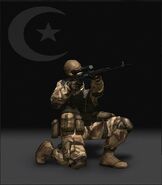 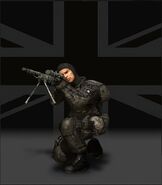 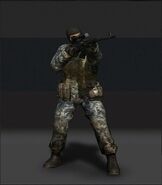 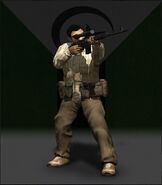 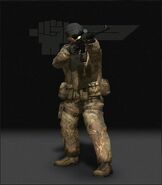 The Rebel Forces Sniper.
Add a photo to this gallery

AN-M8 Smoke Grenade
"In addition to his sniper rifle with multiple zoom ranges, the sniper comes armed with a pistol, smoke grenades, and a laser designator. He can also reveal enemy positions via his GPS."

The Sniper in Battlefield 2: Modern Combat functions similarly to its counterpart in Battlefield 2, still being armed with faction specific sniper rifles and suppressed pistols, but the class now has access to Smoke grenades, the GPS, and the ANPQ Laser Target Designator. The GPS can reveal enemy positions near the Sniper on the minimap for his entire team, and the ANPQ calls in a missile on a designated target. These additions allow the Sniper to support his team with information and provide extra fire power against hostile vehicles, but the Sniper is still weak in close quarters, so should remain at distance or work with teammates to remain alive.

USMC Sniper wielding a Barrett M95.
Add a photo to this gallery

The Sniper kit is featured in Battlefield Online.

Retrieved from "https://battlefield.fandom.com/wiki/Sniper_(kit)?oldid=372375"
Community content is available under CC-BY-SA unless otherwise noted.