The snowmobile, is a land vehicle designed for winter travel on snow. It is designed to be operated on snow and ice. They do not require a specific road or trail. Variations of the snowmobile enable some machines to operate in deep snow or forests.

The Snowmobile is a vehicle unique to the map Frost Bite, found scattered about the map at nearly every control point. It allows two players to use it, a driver and a passenger. The driver has two mounted UZIs on the sides of the Snowmobile that face forward, while the passenger is allowed to use their kit weapons.

The vehicle is best used as a transport to get around the map quickly, as it forward-facing UZIs cannot allow it to fire left or right, and it is difficult to orient against infantry that can easily move around it and kill the operator who is fairly exposed.

The Snowmobile is a Transport Vehicle featured in the Battlefield 4: Final Stand expansion pack.

The Snowmobile replaces the ATV on Operation Whiteout, Hangar 21, and Hammerhead, due to the environments being covered completely in ice and snow. Functionally, the Snowmobile fulfills a role in between both the ATV and Motorcycle, having handling and characteristics of the ATV, but the high speed of the Motorcycle. Like the other two transports, the driver has no access to weapons, save for the ability to Roadkill, but the passenger is free to use all personal equipment, excluding his Knife.

The Snowmobile is a vehicle featured in Battlefield Hardline: Betrayal, appearing exclusively on the map Thin Ice. The vehicle is used by both Law Enforcement and Criminals.

The Snowmobile essentially replaces the regular Street Bikes and Dirt Bikes on Thin Ice, being a very mobile light infantry transport, but has better handling during turns, is capable of driving in reverse, is slightly slower and has slightly more health. The vehicle seats two players, a driver and a passenger, but has no weapons, with the driver only capable of Roadkilling. Instead, like the bikes, the passengers is able to use all personal equipment, except for his melee and deployable gadgets like the First Aid Pack or Ammo Box.

Like the Pick-Up Truck on Backwoods, the Snowmobile is a neutral vehicle and does not have a vehicle category; as a result it cannot equip any customizations aside from Stunt Driver.

Front of the Snowmobile 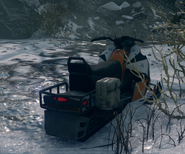 Passenger seat with Dual VZ .61s equipped
Add a photo to this gallery

Retrieved from "https://battlefield.fandom.com/wiki/Snowmobile?oldid=317763"
Community content is available under CC-BY-SA unless otherwise noted.