Soissons is a Codex Entry featured in Battlefield 1, introduced in the Battlefield 1: They Shall Not Pass expansion. It is unlocked by winning one game on Soissons. 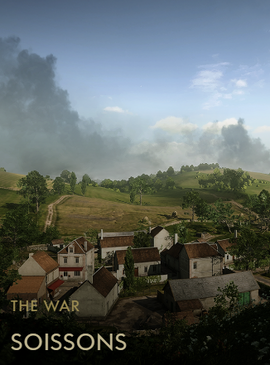 In July 1918, Allied commander-in-chief Ferdinand Foch was convinced that the fighting power of the German Spring Offensive was finally spent. Together with Philippe Petain and Charles Mangin, he planned an all out counter-offensive on the German flank on the Marne salient. With a force made up of the most decorated regiments in the entire French army, including colonial infantry from Morocco, a regiment of the French Foreign Legion, and a battalion of Russians, and the British 34th Division and the first two US Divisions in France, they set the railway junction at Soissons as their first objective. Instead of beginning the attack with the usual heavy artillery barrage, an unheard of total of 478 tanks would go ahead of the infantry in the first wave, aiming to overrun the German positions. Smokescreen were fired to conceal the slowly advancing tanks and infantry, but they still came under heavy German artillery fire as soon as their noise reached German positions. Many of the tanks were put out of action, but the rest were they key to destroying the German machine gun positions around the strongly defended ravines, clearing a path for the infantry. The losses were heavy on both sides, with a total of over 270,000 causalities, but overall the operation was a great success thanks to the tactical surprise of the Allied forces. The mass deployment of tanks was too numerous for the German artillery to handle and allowed for breakthrough on a wide front. Soissons fell on August 2, and the German army was forced to withdraw behind the River Aisne.

Retrieved from "https://battlefield.fandom.com/wiki/Soissons_(Codex_Entry)?oldid=343338"
Community content is available under CC-BY-SA unless otherwise noted.