"I followed you. I'm trying to save your life."

Solveig Fia Bjørnstad is the protagonist and main character of the Battlefield V singleplayer war story Nordlys. She is affiliated with the Norwegian Resistance opposing the German occupation forces. In early 1943 her mother Astrid Bjørnstad, a fellow resistance member, is captured, and Solveig sets off to rescue her while also foiling the German scheme to export heavy water.[1]

Despite a young appearance, Solveig demonstrates traits of an effective soldier - determined, skilled with weapons, and adept in hand-to-hand fighting, all of which are demonstrated throughout the story. Even with no formal military training she kills dozens of German soldiers without hesitation, and wins unarmed struggles on numerous occasions. Her aggression and combat efficiency is apparently infamous with the local German garrison, with Weber mistaking her for a surviving member of the executed Commando team. Aside from her considerable physical strength, which includes high tolerance for pain and cold, she is shown to be a capable skier and outdoorswoman.

Solveig's deep love for her parents serves as her primary motivation, but also as a source of internal conflict. The disappearance of her father led her to join the resistance at a young age, presumably in an attempt to avenge him, to the disapproval of her mother. In spite of this, Solveig shows some indifference towards the mission once her mother becomes involved in resistance activities. While Astrid is determined to stop the export of heavy water regardless of personal cost, Solveig pleads with her on several occasions to give up the fight and return home with her. However, once Astrid is recaptured and Solveig is left on her own, she wholeheartedly takes up the task of ending the supply of heavy water herself. Her stubbornness and inner strength is recognised by her parent, who describes her as "younger than she thinks, and more skilled than she realises", emphasised when Astrid throws her from a bridge down an icy gorge to prevent her capture. It is this strong sense of responsibility and love for her family leads her to brave both cold and extreme danger to rescue her mother - even after collapsing exhausted from hypothermia, it is her mother's voice in her head that spurs her to pull herself to her feet and reach shelter.

Solveig was born in Norway in 1925 to Astrid Bjørnstad and Willie Bjørnstad. Not much else is known about Solveig's childhood but she did become skilful in survival, hunting, and skiing.

Solveig's father went missing following the German invasion of Norway in 1940. As a result, Solveig joined the Norwegian Resistance as one of its youngest members. This strained her relationship with her mother, however, as Astrid did not want to lose her daughter as well. Despite this Solveig went on several scouting missions, reporting any Axis movements back to the British SOE.

In the disastrous aftermath of a British commando raid on the Rjukan heavy water plant in the winter of 1943, Solveig's mother Astrid was captured and interrogated by Weber. Consequently, Solveig sets off alone to rescue her, successfully infiltrating the facility but inadvertently triggering the alarm. Upon locating her mother, Solveig unties her and the two embrace. Before they can leave, however, Astrid insists on staying behind to gather intelligence on the transport schedule on the heavy water so they can sabotage it. Despite her pleas to just escape, Solveig is unable to convince her mother and agrees to help with the sabotage. Once the dossier is located, the pair attempt to escape across a viaduct, only to be trapped by Weber and his men. Forced to surrender and with their capture imminent, Astrid entrusts Solveig with the intel satchel along with a keepsake - her collar pin - before pushing her daughter over the railing.

Injured but alive, Solveig treks across the valley floor with the intel, evading German search parties. While walking through a narrow pass, however, a strong wind blows the satchel from her hands. Chasing after the satchel, Solveig loses her footing and tumbles into freezing water. She manages to retrieve the intel and reach the riverbank but becomes dangerously ill with hypothermia. On the brink of passing out from exposure, Solveig is spurred on by an encouraging hallucination of her mother. Reaching a cabin, she surprises and kills the German soldier inside, but is exhausted by the struggle and faints.

Awaking in daylight, Solveig looks over the contents of the satchel, finding an encouraging letter from her mother asking the resistance to look after her. Inspired, Solveig departs on skis to find and destroy the heavy water transport herself. Reaching the bottom of a mountainside, Solveig comes across a small town on the shoreline, blowing up the German transports trucks therein and razing the Gestapo headquarters within the Police station. While exploring a loading dock on the outskirts of town, she observes Weber placing her mother inside one of the transport vehicles. Before Solveig can intervene, however, she is spotted which prompts the transport to escape across the frozen waters. Unable to allow her mother or the heavy water to escape, Solveig starts her pursuit.

Despite Solveig's attacks, the transport is able to reach the rendezvous point, a submarine, which breaches through the ice. Seeing her mother being ushered aboard, Solveig makes a final attempt to save her but is pinned down by enemy fire. The ensuing firefight causes Astrid to be shot in the back by Weber. Paralysed by shock, Solveig is promptly surrounded. With no other options left, Astrids locks eyes with her daughter before committing suicide with a stolen hand grenade. The ensuing explosion kills Astrid and Weber, and sinks the submarine and its heavy water cargo.

Although Solveig's own fate is not shown, the war story's introduction describes her having made "the ultimate sacrifice", while the final end card states that many acts of heroism in occupied countries during the war went unrecorded by history. 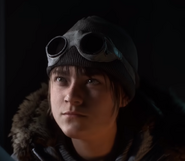 The Bjørnstad family photograph, showing a younger Solveig and her father. 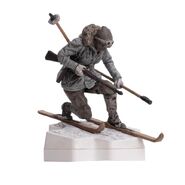