Sopwith Camel is a Codex Entry featured in Battlefield 1. Detailing information about the Sopwith Camel, it is unlocked by obtaining ten kills with fighter planes. 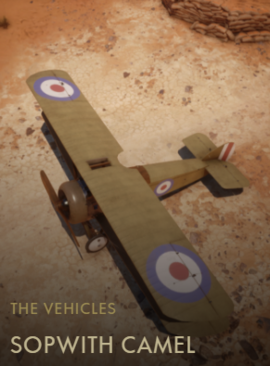 This plane, and the legends that surround it, comes from its many victories during the Great War. No plane can boast of the 1294 victories accomplished by the Sopwith Camel.

The Camel performed in an air superiority capacity. It also performed the ground attack role. The pilot who shot down the last airship of the war did so in late 1918 from the cockpit of a Sopwith Camel.

As a direct development of the Sopwith Pup, the Camel was slightly larger and heavier and featured a rotary engine and 2 forward-firing machine guns firing through the propeller. It could also carry a lighter load of bombs for trench-fighting sorties.

Retrieved from "https://battlefield.fandom.com/wiki/Sopwith_Camel_(Codex_Entry)?oldid=343273"
Community content is available under CC-BY-SA unless otherwise noted.