A spawn point is a location from which a player can spawn and enter the game. They are found at command posts and in Conquest mode they are also found on the captured flags. An advantage to spawning on stationary points is that teammates can hold a position and help out people entering the battlefield. There are often ammo crates and/or vehicles at spawn points as well. However, if the enemy knows the spawn point, one's team can be spawn killed.

In Battlefield 2 the player is able to spawn on the squad leader in addition to spawning at stationary points.

In Battlefield 2142, the squad leader can also lay down a beacon for the squad to spawn on. On Titan maps, the team's Titan, APCs and air transports also serve as spawn points. On maps featuring the A3-Goliath IFV, it too serves as a spawn point.

In Battlefield 3, players can spawn on 'deployment points' that serve as each faction's base. Deployment points are out-of-bounds to the enemy team. Any flags captured in Conquest gamemode also serve as spawn areas.

In normal servers, squad members can spawn on each other; in Hardcore or custom servers with the rule set, players may only be able to spawn on their squad leader. Recon soldiers can use the Radio Beacon to provide a mobile spawn point. Up to four of these (one per squadmate) can be deployed at one time.

Newly spawned air vehicles have their own spawn points, so prospective pilots do not have to wait on the airstrip. Certain other vehicles also act as spawn points, depending on the map and gamemode.

For some maps especially on Conquest type game modes, some spawn points are limited to two areas whilst others in multiple locations around an objective. Each spawn point in some maps are divided depending on the faction in control the particular flag. This allows for easier 'spawn killing' as some spawns are fixed and are not randomised.

In modes like Team Deathmatch and Squad Deathmatch, there is an option to spawn at a random area in the map, which is unknown to the player until they spawn there.

All spawn points appear in a list, allowing one to be chosen with the D-pad on a controller or directional keys on a keyboard. The spawn area preview is shown in the background. 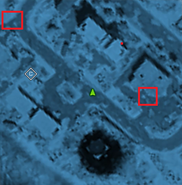 Spawn points limited to 2 in Kharg Island. USMC on the left and RGF on the right. 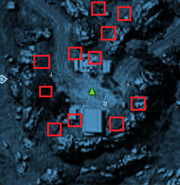 Spawn points expanded to multiple locations in Caspian Border. All spawn points are shares between RGF and USMC and not divided according to faction
Add a photo to this gallery

Battlefield 4 returns spawning to a pointer-based system where spawn points are chosen directly from the map. A video feed in the lower left of the screen shows a preview of the spawn area.

Deployments are marked with squares using the faction's abbreviation (US, RU, or CN). Any vehicles available at the deployment have their own box in a grid next to the deployment icon, allowing them to be easily chosen. Squad mates also have "four corner" icons for their respective spawn points.

In maps/gamemodes that feature them, paradrop locations are marked with a parachute icon. Players that choose to paradrop appear in freefall, allowing them to choose when to pull the chute (or die on impact with the ground or water).

Retrieved from "https://battlefield.fandom.com/wiki/Spawn_point?oldid=300051"
Community content is available under CC-BY-SA unless otherwise noted.