The Special Forces kit, also known as Special Ops or Spec Ops to some, is one of seven usable kits in the game Battlefield 2 and one of the five usable kits in Battlefield 2: Modern Combat. The kit is mainly used for destroying key enemy installations such as UAV Trailers and Artillery.

The Specialist featured in Battlefield: Bad Company functions in a similar fashion to the Special Forces. In later games of the series, the Special Force's function is combined with Sniper to create the Recon kit.

In Battlefield 2: Special Forces, the Special Forces kit is also equipped with a Zip Line Crossbow, allowing them to quickly move from a higher point to a lower point. 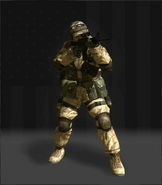 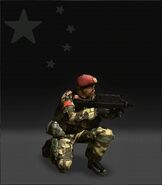 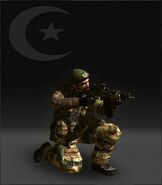 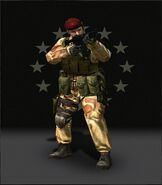 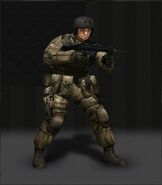 The US Navy SEAL Special Forces. 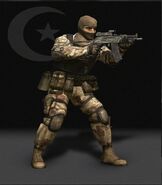 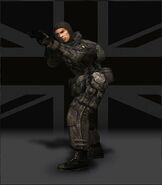 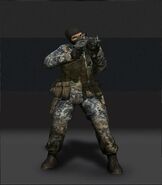 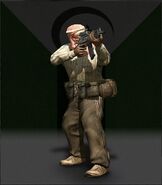 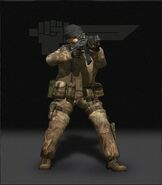 "The special ops soldier is trained in stealth and sabotage. His submachine gun and pistol come with silencers. His C4 explosives, however, do not. Special ops also carry knives, and stun grenades that temporarily blind nearby soldiers."

The Special Ops class appears in Battlefield 2: Modern Combat. Like its counterpart in Battlefield 2, the Special Ops class is made for stealth and close-quarter combat, with the class' submachine guns now featuring suppressors along with his pistols. The Special Ops is also the only class that has access to knives, allowing him to kill an enemy in one hit when up close, as well as being equipped with stun grenades that can blind and disorient enemy troops. The class still retains C4 Explosives for use against vehicles or as traps for enemy infantry.

A USMC Special Ops (right) alongside an Engineer and Support.
Community content is available under CC-BY-SA unless otherwise noted.
Advertisement